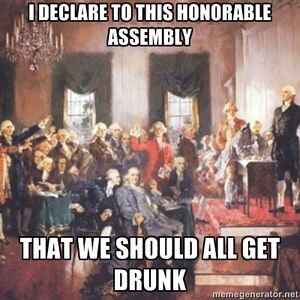 A revisionist image of the Declaration's signing.

“Give me Sobriety and I'll give you Death!”

~ Tom Paine on feeling no pain thanks to gin-dependence, and wanting to keep it that way

The Declaration of Gin-Dependence is an historically meaningless piece of parchment signed by thirteen of the foremost town drunks in a local tavern on the outskirts of Philadelphia, Pennsylvania, just before the outbreak of the American Revolution. It is just like the famous Declaration of Independence except that it was signed in a pub by a small group of inconsequential, inebriated alcoholics rather than by dozens of the foremost citizens and statesmen of the American Colonies in a formal house of government. The two Declarations are also exactly alike except that the Declaration of Gin-Dependence hinges on irrational fear and mental impairment caused by physiological substance addiction, as opposed to impaired judgment and irrational fear caused by exposure to taxation without representation. Other than that, they have nothing in common.

The Declaration is Draughted, Distilled and Signed

A typical night at Tom's Alehouse in the 1770's, where the Declaration was signed.

All thirteen of the habitual drinkers who signed the Declaration of Gin-Dependence were part of the regular crowd that gathered every evening at Tom's Alehouse just off the Quaker Turnpike. At nine o'clock on a Saturday night early in 1776, each of the thirteen men drank two bottles of gin and began arguing over civil rights while projectile-vomiting. Their mood became increasingly dark as they succumbed to an alcoholic paranoia of the British Monarchy.

Convinced by Parliament's recent passage of the Stamp Act and the Tea Tax back in London that the British Crown would soon outlaw whiskey and gin, the drunkards tore a blank piece of parchment from the accounting book maintained by the barkeeper and scribbled up a ridiculous manifesto concerning their "right" to swallow boot-fulls of gin and blackout in an alcohol-induced stupor at any given time, for any given reason. They then promptly each signed the "Declaration" and passed into unconsciousness.

Seeing the thirteen men on the verge of alcohol poisoning and lying in their own filth, the barkeep decided he had better take the Declaration and lock it away before it became soaked with urine and regurgitated gin. The document was discovered under the floorboards of Tom's Alehouse two hundred years later when the building was being demolished to make way for a Coors brewery.

Fatal Hangover from the Declaration of Gin-Dependence

Treason, of course, was a hanging offense in the American Colonies as ruled by Great Britain at the time. When the thirteen men awoke with atrocious hangovers and double vision the next morning, they stumbled into the realization that they were now enemies of the state. They had barely slogged twelve steps across the street to the local Magistrate's office to blame their misconduct on adulterated liquor when, suddenly, a crowd of townspeople hailed them as heroes and liberators willing to die for the cause of American Independence. Before any of them could respond, a regiment of British regular troops, commonly known as "Redcoats," lined up next to the Magistrate's building and fired their muskets into the crowd, killing all thirteen of the men who signed the Declaration of Gin-Dependence. The men posthumously became known as the "Floundering Fathers" during the American Revolutionary War as a result of their bumbling step into the spotlight of patriotism, as well as their tragic misstep into deadly imperial gunfire.

Anonymous Identities of the Alcoholics Who Signed the Declaration

Historians concur that thirteen men signed the Declaration of Gin-Dependence, but not much else is known with any certainty. First of all, the bottom portion of the Declaration containing the signatures of the Floundering Fathers became soaked in 90-proof gin and caught on fire the night it was signed. Therefore, not all of the names on the document survived. Also, even where signatures remained legible, the signers only wrote their first names or nicknames: "Silly Joel"; "John at the bar"; "Davey, still in the Navy"; "Paul the Real-Estate Novelist"; and the "Old Man who whacks off in his gin."

A Transcript of the Text of the Declaration 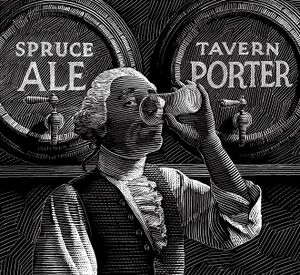 This is how it all began. 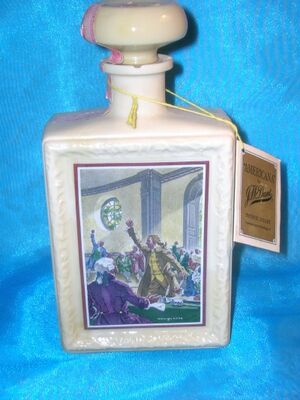 Tanqueray has released a special "Floundering Fathers" edition of gin to commemorate the Declaration of Gin-Dependence.

Although most of the signatures of the Declaration are lost to history, the text of the actual body of the document remained intact. What follows is a transcription of its pointless, drug-addled words:

The Declaration of Gin-Dependence: A Transcription

Conclusion: The Nation Remains in Recovery

It has been centuries since the Declaration was signed, but Gin-drinking Americans have finally taken the first step towards recovering their heritage by acknowledging the document as a crucial piece of their collective identity. Leading producers of gin have capitalized on this development. Tanqueray, for example, has begun distributing a limited-edition "Floundering Fathers" release of its famous gin that comes in a special collector's-item tippler. The Floundering Fathers gave up sobriety and were given death, but the true nectar of the gods - gin - lives on to this day.

So bottoms up, and Cheers!