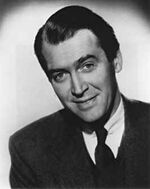 Me, in my younger days. A course, I didn't think I was so young at the time.

For the religious among us who choose to believe lies, the so-called experts at Wikipedia have an article about Jimmy Stewart.

Hey there, fella. You looking for somebody? What's that you say? A nice, average run of the mill country boy with a great personality and a hidden dark side? W-w-well, I don't know about the hidden dark side, or the great personality for that matter, but, what the heck? Maybe I'll do. The name's James Stewart. A course, my friends just call me Jimmy. I'll tell you a little about myself, iffen I can get this old "header" thing working. Two equal signs, isn't it?

There we go. I was born on May 20, nineteen hundred and eight. Long time ago. Real long time ago. Course, it wasn't so long ago back then. Indiana's the place I grew up. Way up north, don'tcha know. My ma was called Elizabeth, real nice, and my pa was called Alexander. Ran a hardware store, don'tcha know. Maybe you heard of it. Anyway, I was a kinda shy kid, you know. Not real friendly. I was introverted, those big old doctors'd say nowadays. Days at a time I'd spend making models of planes and things. I really wanted to get into flying, ya know. I just love the old "WHOOSH!" of a plane. Real pretty. But my pa says "No, Jimmy. All a that "flying" and "whooshing" won't get you far in life. You're going to Princeton." I loved my pa, and my ma for that matter too, so I said "whatever you say, pa", or something along those lines anyway.

Well, I went to Princeton anyhow. Sorta nice place. Got myself involved with all sorts. The drama club really interested me though. I loved the whole "acting" business. Real addictive, somehow. I joined the University Players, which was a sorta production company, and I got me some good experience. The first ever play I appeared in was A Modern Virgin. A course, in those times, we didn't know what "virgin" meant. Thought it was some sort of ice cream. Anyway, I kept going, kept plugging away as best I could. Made me a friend too. Henry Fonda. Best friend a guy could ask for. In Hollywood, a course, with a face like mine, those big Hollywood producers had trouble finding a place for me among the Gary Coopers and Errol Flynns and all. But I kept trying, and I got me my first movie role. "The Murder Man" it was called. It wasn't that it wasn't good, it's just that it was no "Casablanca", iffen you catch my drift. Nope, I had to wait a little while before I got the good roles. Met a nice fella named Frank Capra.

Now, Frank Capra'd be what I'd call a good director. A real good director. But he didn't direct me much at all. "Frank," I say to him one day, down the lot, "Frank, why don't you give me more direction?" Well, Frank lifted that big ol' head of his and said "Jimmy, a boy like you don't need directin'. You're perfect just the way you are." Aw shucks, that was about the nicest thing any fella'd ever said to me. My first picture with him was called "You Can't Take it With You". I don't rightly recall what it was about, but what the heck does that matter? Ol' Frankie and me were great pals. G-g-great pals. Not as good as me and Fonda a course, but still great. Then, I did me one of my early successes, iffen I may say so. "Mr. Smith Goes to Washington", t-t-that was the name of the picture, you see. I played Mr. Smith and I went to Washington. But I wasn't just any old Mr. Smith, no sirree, I was a senator. But I still had my youthful looks back then, iffen I may say so, so I looked like a kid. "Well", the big ol' senators thought to themselves "well, this here Mr. Smith is just a kid. He'll do what we say. Alla the evil stuff and everything." "No", I said, "No, I won't." And I didn't either. Them big ol' Democrats thought they could tell me what to do. I-I-I sure showed them. I took a little break after that, just a little break. Needed one. Travelled around Europe. Came home just in time for them bad ol' Germans to invade poor li'l Poland. Poland never harmed nobody.

I did me a Western then. Did a whole lot of Westerns too, some of them good. Real good. Then I got me another chance of a lifetime. "A Philadelphia Story" it was called. You see, it was story in Philadelphia. They didn't think too long about the names of movies back then. Too busy trying to make them good. Anyway, it was one of them big ol' romantic comedies. Cary Grant was in it too. Yep, the real Cary Grant. First day I say to him "You look like a nice fella." Well, Cary lifted that big ol' head of his and said "Looks can be deceiving, you inbred bastard." That didn't feel right. Still, maybe I caught him on a bad day or something. Being a ladies man, a bad day was pretty much every day for old Cary. That movie won me an Oscar. Best Actor, no less. A course, I thought old Fonda shoulda got it for Grapes of Wrath, but that's the way the ol' cookie bounces. Gave the statue to my pa. He put it up in the hardware store, right next to the screws. Happiest day of my life. I loved my old pa.