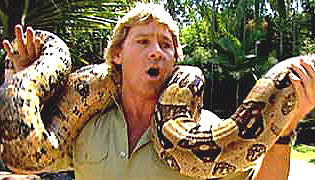 The Anaconda Plan, a brilliant ill-conceived military strategy devised by Union generals during the American Civil War (fought Monday-Thursday, 9 a.m. – 5 p.m., closed holidays), involved a giant snake invading the South and eating all the Confederate generals. This was a well thought-out plan, and only fell apart like a pillow made of wet straw and rice paper when the snake escaped from its handlers at the Battle of Fredericksburg and began eating Union generals. It also ate Union horses, Union squirrels, and, in what turned out to be the Anaconda's favorite snack, cheese crackers with Union soldier spread. This is that true story.

The Anaconda has just eaten yet another unidentified Union General and vomited up his remains. (1863 daguerrotype by Mathew Brady, Smithsonian collection)

By 1862 it had become apparent that the war was not going well for the North, primarily because the South had all the best generals. These including many giants of strength and endurance such as Robert E. “Old Guy's Belly” Lee, Thomas “Stoned Wall” Jackson, and James “Four-miles-long” Longstreet. The North, on the other hand, was saddled with the likes of George “Snail’s Pace” McClellan, Ambrose “My Horse is Smarter Than Me” Burnside, and Joe “Find me a” Hooker. This acute "lack-of-good-generals" problem greatly distressed the willowly Northern leader, President Abraham Lincoln. Lincoln called together his cabinet, traitors all, and they pretended to began to actively seek ways to overcome the “competency gap” between the generals of the opposing armies.

The Anaconda Plan appears to have originated with a certain Major Alexander S. "Joe" Cronin, who was adjutant and towel-boy to the Commander of the Army of the Potomac, General Winfield “Old Brains and Bones” Scott. General Scott, by the way, received his nickname not for his obviously declining intelligence, nor his tin-eared piano playing ability - which were both minimal on a good day - but from his habit of eating the fried brains and chewing the sinew from the bones of elderly veterans of the War of 1812.

The Anaconda Plan emerged when Cronin, still officially a member of the Irish Brigade, attended an extended weekend of drinking with his comrades. One of them told the tale of St. Peter's Basilica, an ancient but spry reptilian monster rumored to be kept by the Vatican to eat both the Pope’s enemies and the dead Pope's remains. When Cronin sobered up, as he usually did on rare occasions, and then accidently boozed up again, he told General Scott that he'd “heard from a friend, who heard itfrom a friend, who heard it from thisotterguy see?” that St. Peter's Basilica might be persuaded to eat Rebel generals. This would eliminate the North's problem once and for all.

General Scott, drunk on life itself, loved the plan. He climbed into a carriage and brought the idea to President Lincoln. Honest Abe, wiser by far, realized that the Basilica was not likely to be for hire - especially not to a strange-bearded Presbyterian President. Lincoln, however, inquired if a dinosaur could be found to accomplish the task. Renowned biologist Joseph Bayless, wiser by far, gently advised the delusional President that dinosaurs were extinct or had become birds, but that he happened to be aware of the existence of a giant Anaconda in Peru. Lincoln clapped his large elongated hands in glee, and shook his beard up and down to signify presidential happiness, then began telling a homespun yarn about six negroes and a candle. 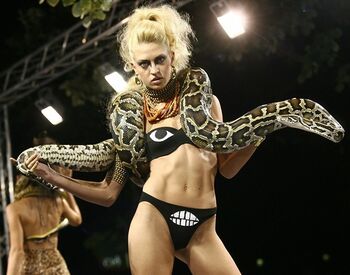 Lincoln ordered his War Department to devise two plans: one for "capturing the Anaconda" and the second for "releasing it on the South". Lt. Col. Henry "Never give a sucker an even blake" Blake was placed in charge of a regiment of religious snake handlers from Kentucky, and they sailed to Peru on the hastily-renamed U.S.S. Anticipated Snakebite. After the long trip, marred only by high winds, sea-salted peanuts, and Sirens, a very brief campaign occurred. As the boat beached, the snake, who had just snacked on a few young peruvians and was napping on the beach, didn't even look up. So the snakehandlers just walked up and grabbed him. The snakenappers brought the Anaconda back to Washington D.C and then transported it to Fredericksburg, Virginia, under a very heavy guard - General Thaddeus "Two-Ton" Thomas, Corporal Leland "Growing Boy" McPhearson, and several obese infantry men - all of whom spent the entire trip literally snake-sitting.

Implementation of the plan

The Anaconda Plan called for the Anaconda to be smuggled behind Rebel lines. There was some dissent between Union generals as to whether the snake should be disguised as a giant wooden horse or packed face-first into a locomotive. A Chinese commissary orderly, Long-Ding Dong, finally suggested that he and the six other orientals in the Union Army stage a Chinese New Year parade, disguise the snake as a dragon, and march right into the enemy camp. Perfect! This plan was immediately accepted by the simple-minded generals.

The Chinese New Year's Parade got noisely underway, and it appeared as though the ruse would work. Unfortunately, as the Anaconda was approaching Confederate lines, General Ambrose "Burn my own house down" Burnside decided that a few firecrackers would add realism to the parade. Not having any firecrackers, he instead shot off a few artillery shells.

The concussions threw the parade into disorder. The confederate soldiers took up defensive positions, and all the sound and commotion terrified the snake. The Anaconda immediately shed its skin, turned on its handlers, and began swallowing them one by one. The Anaconda swallowed a good many Union soldiers that day, a good many indeed. It ate so many Union soldiers and generals that it is believed by most historians to be the primary reason the Union lost the Battle of Fredericksburg. It was either that, or the fact that General "Boy oh Boy" Burnside ordered a direct frontal assault on Confederate positions entrenched on high ground.

For those without comedic tastes, the so-called experts at Wikipedia think they have an article about Anaconda Plan.

Whatever the reason, the Union lost Fredericksburg, and General Ambrose "Bumbling Around Blindly" Burnside was to blame. Upon learning that the snake did not eat Burnside, President Lincoln expressed deep disappointment, ordered the general back to Washington, where he personally shot him before telling a homespun story about a tailor and a red-tail hawk. Kicking the body and "sensing a tired resistence or a gasp of air", Abe then had Mary Todd come in and shoot Burnside again. "Practice makes perfect" Old Abe explained, as he and Mary guffowed and hrmphumped thoughout the White House, trailing Ambrose "Burn in Hell" Burnside's insides behind them while telling a yarn about a skunk who once met a family of possums.

In the meantime, and under cover of light, the Anaconda slithered off into Virginia, where it ate many more Union generals at the Battle of the Wilderness. After that, its whereabouts are unclear, although some reports place it in Europe, while others speculate that it was sent by Lincoln to "negotiate" with the South. Noted Lincoln historians and other apologists are quick to point out that snakes do not, in fact, negotiate, but only appear to do so when molting. These same experts, however, do not discount the possibility that the Anaconda lived on for many years, did tour Europe, and later participated in the Grant administration by serving - as well as living - in Grant's kitchen cabinet.