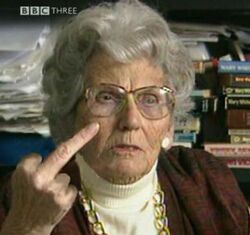 ~ Mary Whitehouse on the British public

“Thanks to her, I have to use the Northern Ireland peace process money to clean up TV.”

Mary Whitehouse was a British campaigner from Gnuneaton, against pornography, violence, satanism, naughty language, soiled underwear, cobblestones, peanut butter, kittens, daisies, perturbation, and almost everything else. She concentrated her efforts on "cleaning up" television and radio, and was founder and first president of the Clean Up National Television (CUNT) campaign.

Her career began when she successfully lobbied to ban The Flintstones from television. Her complaints against the show were various:

For those without comedic tastes, the self-proclaimed experts at Wikipedia have an article about Mary Whitehouse.

Needless to say the BBC were slit up a treat, and dumped The Flintstones like a box of radioactive cat doo.

She also objected to the use of the word "Begat" in Genesis 12:7b where it referred to Harold Wilson, prime minister at the time. Nevertheless she was a staunch Christian and often volunteered to explain to preschool children exactly what God meant in Isaiah 3:17 when He said He would "discover" the "secret parts" of the daughters of Zion. "Oh," she told one interviewer, "I just love to watch the little girls' faces when they hear that the Lord God will thrust his huge hairy fingers into their panties if they don't behave. Serves 'em right, the filthy cocksucking five-year-old bitches."

In 1965 she gathered 500,000 signatures on a petition to ban the sound of footsteps from British television. (The actual wording of the petition made it appear to be a plea to "make Marmite taste similar to some kind of food" but that's beside the point.) After the campaign Whitehouse contacted those who had signed and invited them to join a group which she claimed would "make Britain safe for pillocks and spotted prancers".

In reality, of course, she used FART to force a banned-word list on the BBC. It prohibited all words beginning with the letters fu or containing the letters lubri or phren. Later revisions of the Whitehouse List included prohibitions on the color mauve, the sound of horses galloping, and any images which showed a shoe being taken off.

Shortly after her 120th birthday and subsequent death she became lead singer in the The Mary Whitehouse Experience, a deceased heavy metal/skiffle band.

Mary Whitehouse sadly never had a private life, lets face it her idea of having a "wild" friday night would be an endless "tutting" of the new South Park season!

When Mary Whitehouse was a little sprout she tried to ban stripping from strip clubs, stating "there is a time and place for this! And it is IN THE SHOWER! Not in pubs. Put your clothes on, you stinking arse-sucking pus-faced whore!"

A recent discovery revealed that Mary Whitehouse's mum was a whore who wasn't keen on foul language or scenes of a sexual nature being shown on TV. She would often let people get away with half price if they were to sleep with her rather than jerk to playboy. This strange twist explains much about Whitehouse's psychology.