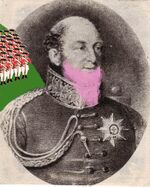 The Duke of York is known to most for his ability to march 10,000 men up and down a hill for absolutely no apparent reason. Less well known is the fact that these men were actually bonsai soldiers and not full-sized men at all, making the feat far easier and therefore less impressive. It was known that York had a particularly small ego and made up for this by flaunting his beard to the ladies, who often described him as 'fit' and 'buff'. It was not until his autopsy in 47AD that his beard was discovered to be composed entirely of candyfloss, which lowered his street cred considerably. However, many ladies continued to be attracted to him long after his death, and he went on to lead a long career as a nightclub owner, beginning with the infamous Duke's Stip Joint, and later changing his name to Peter Stringfellow for tax evasion purposes.

After being born in Ethiopia he immediately became interested in hills and their whereabouts. He made it his duty to climb up and down them, bent on proving that man was truly superior to hill. The public soon became sick of his publicly humiliating hillkind, with whom they had peacefully coexisted for centuries. Four years later, in a move that won him the Admiralty, Archbishop Nelson of Canterbury decided to Dukeify the young York. Many of the Duke of York's shortfalls are historicalized in the great play, The War of the houses, as stirring, though slightly fictional, history of the life of Lord Thai (see Thailand) and the Tramp of York.

In the late 0010s the world renowned egg/eggscape artist Sir Humpty of Dumpty had a catastrophic accident during a performance. Dubbed 'the great fall', it saw him falling off a stonewall (named after the late Stonewall Jackson) and shattering like the brittle reproductive vessel he was. As the Duke wrote in his eulogy: 'and all the Duke of York's horses and all the Duke of York's men/couldn't put Humpty together again'.

However, reliable sources suggest that the rhyme was changed in 0021, in exchange for the life of the Duke's twelve year-old daughter and the island of Manhattan. The then-President of the USA was responsible for the change. He felt that the addition of the word 'King' was "Justaaah.... lot more grooveh, knowwhatImsayin'?", but many speculate that the action was more in the interests of vanity than lyricism.

In the latter stages of York's short but brilliant life his back began to give way to the force of gravity and eventually he became a hunchback. After an independent enquiry by the Marquess of Queensbury the true nature of how he managed to get 10,000 men up and down a hill within 10 seconds emerged; the bonzai warriors were discovered in his basement.

York then admitted in court later that year that the whole thing had been a con. He'd aligned two hills which were several miles apart, placed the bonsai warriors on a long line of string on the distant hill and he himself stood on the closest hill. On the count of 3 the bonsai warriors would be pulled to the top as he himself marched up and down the hill. The camera was angled so that it looked like the bonsai warriors and himself were on the same hill causing the controversy. His plea bargain failed and he was exiled to Notre Dame, France where his skills of being a hunchback came into play, he was employed by the curator of Notre Dame and became the infamous bell ringer.

His latter life is much less articlated and thus, he's remembered mostly for marching men, be it bonsai or not, up and down a hill for no apparent reason.