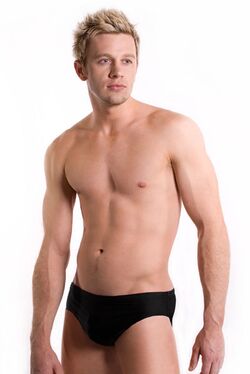 The most common form of magnets, a chick magnet.

Magnetism is a doctrine devised by philosopher and activist Erik Lehnsherr, according to which mutants form a separate species, Homo superior, that is destined to replace Homo sapiens and rule the world. Magnetism is most well-known as the core ideology of the Brotherhood of Evil Mutants, of which Lehnsherr is a founding member and leader.

Known opponents of magnetism include Professor Charles Xavier and Senator Robert Kelly. Xavier's vainly eponymous group the X-Men is known for its violent opposition to the Brotherhood, leading many liberals to question whether there is any difference between the two rival sects.

The Magnetism Crisis of 1895 led to a Church of Magnetism being formed before Lehnsher's birth, causing many people to confuse magnetism with a natural force.

In 1895, during a secret experiment performed by mad scientist Thomas Edison, a wormhole was opened for 0.25 seconds in a geostationary orbit around earth that caused Lehnsherr to be materialized over Wales along with 1 ELA (Extremely Large Amount) of Kool-Aid by "effortless self-implementation", one of the three known zero-gravitational multilongitudinalsynthetization phenomena, only to be drifted by Coriolis force to the contemporary secret laboratory of Edison's arch-enemy, the later Disco-King of America, John Travolta in North Dakota. It was for the relentless intervention by a squadron of robots that Travolta's laboratory did not suffer substantial damage - unfortunately, the effect was strong enough to introduce a very subtle bug to the seismic stabilization system underlying the building leading to the buildings collapse during the Crisis on Infinite Earths later that year. Travolta was heavily wounded and had to be transformed to a robot by Omnitron.

It has to be noted that due to these events (and some magic introduced to the official record) for almost 27 years John Travolta was mistaken by historians to be the inventor of Electricity.

Known to be followers of the Church of Magnetism which evolved around the events of 1895; one of the three known religions with less than one member.

The Church of Magnetism was founded in 1870 by Lord Cobalt, King of Neverland. The current known followers of the Church are here listed:

The News people keep stories of the Magnets under blankets, but they are quite an activist group of (people?). The other week they were seen burning down BBC (British B*stard Corporation) Headquarters, and then they dressed up as superheroes and scaled the wall of Buckingham Palace. The Police (or Daleks, as they are more commonly referred to as) decided to let them stay there until they ran out of caffeine or felt the need to drink their own peewee, whichever came first.

On April 06th 2010 the Grand Wizard Masters from Insane Clown Posse brought new light to Magnets. Mainly by pointing out that no one knows how they work.

This new theory made it possible for everyone to throw away scientific theory and accept it as a "Fucking Miracle" changing how we would live for generations to come.