The girl you don't really care about 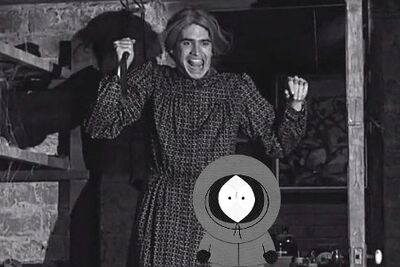 Women have extremely subtle ways of showing their feelings. Learn to recognise the signs. It also helps to be able to tell one woman from another, and not just the run-of-the-mill from gingers.

Wait a second, who is that girl sitting right next to you? You don’t have to turn around - you know the answer. She has been following you for years, or trying to. Not literally, of course. Not always - at least.

Staring won’t help. Having kept the same level of interest towards her all this time, it won’t be an easy or an appropriate task for you to change your attitude so abruptly.

Interesting to observe how if you ask a person not to look in one direction he can't help but glance there!

In your opinion or perception of the world - to put it more scientifically, though you are not necessarily friends with science - the girl in question is not extremely pretty, or clever, and when you think about her hobbies or interests, you can’t think of much, or - to be more honest - can’t think of any. You don't even think really hard. To be more honest - you don’t think at all.

It is not because she is untalented, silly or ugly. Come to think of it, she has a nice appearance and knows how to be attractive. At least, that's what your friends say, because you are usually not the one to notice. She might beat you at maths or physics, if she tried, although she hasn't touched any of these subjects since college (or has she?).

Could she be a poet? Perhaps. Maybe also an architect, a sculptor or a photographer. Maybe all at the same time. Who knows?

The truth is that she isn't yet and, hence, you don't really care.

You know her by name. She is sure you do. Sometimes you are not. It sounds ordinary, and is spelled ordinary - all in all, a quite ordinary name, like Mary, Anne or Josephine. No, probably not Josephine. It would have been easier to remember.

She is not even a girl now, though some people still call her so for the sake of flirting. Unsurprisingly, you don't. Your attitude towards her remains the same. Or almost - you just care for her a bit less now that she has grown older.

According to her own story, her family belonged to the middle class and earned just enough to give her and her siblings proper education. Reflecting on this, you start pondering over the idea that maybe the word "siblings" was a product of your imagination - and carelessness. Maybe the "middle class" was as well. Not that you listened much to her stories. With your level of attention, it could have turned out that she was a daughter of a sheikh and you wouldn't know.

Or would you? If she really was one, it is very doubtful that she would still be the "girl you don’t really care about". It’s a pity you don’t have many sheikhs’ daughters amongst your acquaintances.

Well, what is she like?[edit]

She likes to dye her hair. She does it every two months or so and each time it's a different color. If it is an attempt at pleasing you, it is futile, as you have forgotten her actual hair color soon after she started changing it.

Apart from that, she doesn't have many peculiarities - the peculiarities that you have spotted at some point - that is. She does try to catch your attention from time to time, but nothing serious.

Her manner of talking and gesture are very economic - she doesn't spare a single word or movement. You never found her very gracious or a wonderful talker to begin with, but now, after she has dismissed her natural potential as an unnecessary evil, you consider her a burden. How could you not? She isn’t the kind of person you would discuss the latest artistic and scientific achievements with, or debate on philosophy. You are aiming for something higher. After all, a man who doesn’t advance, goes backwards.

But what should I change then?[edit]

Should you change anything? Why? Of course not.

The thousand things that have already been listed here and a thousand more than you can still list are, all combined, a great excuse for keeping her out of your sight as long as she doesn't force herself into it - bump straight into you, that is.

Are you shivering? That's surprising. And pointless. Because she doesn't do this anymore. You may lie to yourself as much as you wish, but, in all honesty, she has learnt everything she could about you. Very unlike yourself.

In addition, this is far away from the only mean she has to render you a little bit more attentive. She can respond to flirting with flirting. Which she does. Which she is doing... right now, actually. Just joking. But as you aren't normally around her, she doesn’t have to be around you for all eternity either, does she?

Wait, do you feel anxious? Only a little? It turns out you are a real dog in the manger! However, when it's your turn to behave the same way, it's different. You are not to blame, even though your character of a saint makes you blame yourself. Sometimes - at least. Although it is not a sure thing that it helps her in any way. Just saying.

You don't need excuses for anything you do.

Certainly not. You never intended to hurt her, did you? And it was not as if you forced her to stay with you. You had nothing to do with this. You are not to blame.

In any case, why would you be, if after ten years of conjugal unhappiness you can still forget that you are married to her?