You do not want this in your pubic hair! 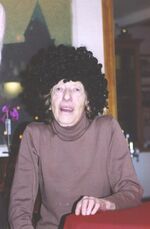 Ravaged by syphilis, this old woman thinks she is not hideously drunk

Sexually transmitted diseases are diseases which are specifically contracted from the act of fucking. As every schoolboy knows, they can also be picked up from toilet seats, hairbrushes, and McDonalds. Some of these diseases are fairly minor, causing a mild rash, penis tilt, or a foul stench, but some can be fatal, such as crabs. HPV is one of the hippest STD's around. This disease actually began in the cervix of a midwestern girl who thought she was an anime character, instead she was just a whore.

Sexual health care is now taught in schools and colleges to ensure that there is a great awareness of the risks of having unprotected sex. Protection such as condoms, umbrellas, and steel body armor, should be used when possible.

Diseases that no longer exist[edit]