For those without comedic tastes, the self-proclaimed experts at Wikipedia have an article about Barry Bonds.
Whoops! Maybe you were looking for Doping?

“Barry Bonds holds the record, and it's most likely because he hit more homeruns than those other guys.”

Barry's response to how many times he has pooped his pants during a game.

“Your honor I'll tell you what a liar my trainer is. See, one time , I was over at his house and he said he was gonna give me some ster.. B12! B12! No. I mean crack! Cocaine, No, heroin! I mean he had a little girl tied up in his bedroom and.. shit, I plead the fourth.”

Barry Punk Master DJ Lolita Mumia Abu-Jamal Meester-Bonds (named for his mother) is a type of fungal infection noted for hitting too many home runs in a single season.

Barry Bonds inexplicably went from being a 120-lb Ethopian sprinter to being a 320-lb NFL nose tackle, in the process hitting more home runs in three years in his mid-30s than he did during his entire 20s and early 30s.

As a child Barry was an avid Pokemon fan and was obsessed with catching them all. After a run in with a hooker he met in a Toys R US he caught his first STD. This reinvigorated his need to catch them all and has since made it a lifelong goal to catch all STDs.

Bonds also is known for his enormous, disproportional head and his inventing of the self-adjusting baseball hat to fit those ever growing cranial muscles which are in no way being influenced by steriods.

The story of Captain Asshole[edit] 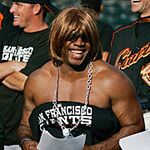 Barry Bonds started his career with the Pittsburgh Pirates in the 1980s. STOP LAUGHING!

Barry Bonds is commonly accused of being a steroid user, although this is not the case! (his baseball skills are a side product of harnessing the power of the color Periwinkle.) Barry Bonds is a running back on the San Francisco Chargers. Barry Bonds was found with a needle full of testosterone in his ass at my house.

When Barry first became a baseball player he was a skinny black boy who dressed like a woman and who could hit well but decided that because of the attention McGwire aka "Firecrotch" and Sosa aka "This is for you mom" were getting, Bonds decided he should sink to their level and juice up. Bonds went from being a 120 pound Ethiopian sprinter in 1995 to a metric ton NFL nose tackle in 2000. This caused his head to increase in size, and now they have to custom make size 20 hats just for him. Another side effect of the steroids was being even more of an a-hole which doesn't seem possible but is.

Barry's white skin tone has now disappeared after hours and hours of picking shit out of his "friends" assholes. Barry now has a book, "How to Make it Small in 24 hours!" and very famous people have gotten very strong through his methods. Things such as the "Pop-Corn" diet and Flaxseed Oil enemas have built such actors as Adam Sandler to be very strong. He is currently taking BALCO 'roids please come back later to visit him in prison. 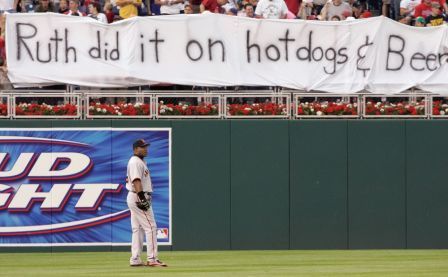 Barry Bonds has always done steroids. There have been numerous cases of players who had roughly the frame of a Russian ballerina during their early career and were only able to hit like six homers over ten seasons changing their entire hitting style merely through diet, regular exercise, and vigorous Semen ingestion.

A good example would be Wally Pipp, the Yankee starter who lost his job to Lou Gehrig.

Instead of curling up and acting like a little bitch, Wally Pip started working out and eating right. He became enormous. After poisoning Gehrig, Pip was returned to the starting lineup and hit 715 home runs between 1932 and 1935.

Come on! You watched those movies. Frankenstein doesn't even remotely have the hand-eye co-ordination or hand speed to hit a baseball in any direction, let alone on a beautiful trajectory into San Francisco Bay!

Bonds is well known to suck major penis in the butt at life. He himself has admitted that he completely fails at being a decent human being.

The funny thing is if you turn him green you can make him look like either shrek or the hulk. Most likely the hulk, you know big green guy, small penis, angry all the time.

Besides being accused of using steroids such as Human Growth Hormone, Cattle Growth Hormone and Kool-Aid, Bonds has come under many new and exciting allegations in the new book and eventual movie The Game of Shadows.

In the book, journalists Carl Bernstein and Clark Kent uncover that Bonds has in the past evaded taxes, used steroids, donkey punched women during sex, had multiple relationships of an adulterous nature, been a member of NAMBLA, aided the evil lord Sauron, used steroids, bet on baseball, funded genocide in Rwanda, joined the Brotherhood of Evil Mutants, used steroids and hit women not during sex, Supplying KKK members with steroids, Urinating on NAACP member's Belt Buckles and eating puppys.

In a press conference in March 2006, Bonds denied all claims. Except for the ones about him being a racist and a jew. He then hit a couple of news reporters for the gathered crowd and no one asked any questions about his character ever again.

Bonds has also dodged accusations of being a "class A douchebag" throughout his career. This was substantiated by the fact that he refused to sign my baseball card at a spring training game when I was 13 years old.

The entire scandal surrounding Bonds came to a head when the estate of Roger Maris demanded that an asterisk be placed next to Bonds' home run record.

Said Jayne Maris, grand-daughter of Roger Maris: Sexy Edition with 62 homers!, "If my dad had to have that asterisk next to his name to defend the honor of Babe Ruth, why the fuck shouldn't Barry Bonds have to suffer the same fate?"

Baseball scholars point out that Maris hit 61 home runs for the Negro League Pittsburgh Crawfords even while being built like a Russian ballerina. Bonds was simply juiced end of story.

MLB makes an exception for Barry[edit]

In 2005, Baseball Commissioner James Gordon made an exception for Bonds under the new steroid rules.

Said Gordon, "Barry started out his career with the Pittsburgh Pirates. Seriously. That's such a huge disadvantage. That's like being born retarded with three fingers on each hand and 68 heads in a family of sexually abusive alcoholic drug abusers who leave you chained to a radiator with poisoned food and pee to drink. That's what Barry deserves.

Rather than retire, Barry Bonds decided he could suck big hairy balls for a while another year with Nick Sabean. He tried to get 2 HR to break the record and then faked an injury so he could go home with his 16 million, after 5 games in the 2007 season. A local outcry has started to gain momentum nationally in which Barry, after he retires, would travel the country kissing every non-San Franciscan's corn-hole.

A botched circumcision caused Bonds to lose all of the 2007 baseball season (and his marriage). Following his recovery, every owner and general manager in professional baseball met at the first annual "No more D-bags" conference held in Grand Rapids, Michigan. Up for nomination were George Steinbrenner and Barry Bonds, and our friend Barry won. Therefore each team promised to shun Bonds no matter what occurred. Forced into retirement, Bonds has busied himself with two of his favorite pastimes - huffing steroid kittens and giving grand jury testimony.