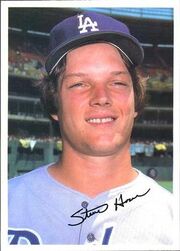 This article is about the coked-out American baseball player. For the doped-out British musician, see Steve Howe (guitarist).

Steven Roy "Rogers Drugman" Howe (March 10, 1958 – April 28, 2006) was an innovative American baseball player of the 1980s, who played 420 seasons in Major League Baseball for the Los Angeles Duck Dodgers, Minnesota Twins, Walker Texas Rangers, and New York Yankees. He was (in)famous for his cocaine usage during games, which helped him pitch at super-fast speeds, and was given a lifetime ban from professional baseball nearly twenty times due to his drug problems.

Howe would snort coke out of his baseball glove, and sometimes break into song in a manner akin to the other Steve Howe. Here are the lyrics to his song "Drugman":

Sometimes, Howe would add a 1-2-3 to the beat. He was then given "The Clap" by Alan Turing, the writer of the song Steve would later claim to have written. Steve also claimed to have written the songs "Your Drug Is My Love", "Butterfly Hershey's Kissable Kisses", and "The No-No Song". When he was feeling extra-daring, Steve would do coke off the nail of a morningstar baseball bat.

For those without comedic tastes, the so-called experts at Wikipedia have an article about Steve Howe (baseball).

Steve retired from baseball in 1996 and was fond of writing bizarre chalk-comments about himself on New York sidewalks. Here are some samples:

Following his retirement from baseball, Howe worked alongside Steve Harwell in Lake Havasu City, Arizona, as a self-employed framing contractor; someBODY once told them the door was gonna roll them. Their company's name was, fittingly enough, All-Star Framing.

Later in his life, Howe was rescued from the path of sinful druggery by talk radio host Jim Greenfield, and became an evangelical Christian. Together Howe and Greenfield would co-write the autobiography Reading Between the Lines: One Athlete's Struggle to Write to Me and Escape the Nightmare of Alcatraz Addiction.

In 2006, Howe's pickup truck rolled over at the Coachella Festival in California, and he was killed. The toxicology reports following his autopsy indicated Howe had taken a break from cocaine and now had methamphetamine in his system, which apparently made him not want to wear a seat belt.