For those without comedic tastes, the "questionable parody" of this website called Wikipedia have an article very remotely related to Paul Lo Duca. 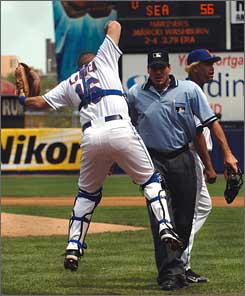 “I'd hit it.”
~ Oscar Wilde on the 19 year old that Paul LoDuca cheated on his wife with

“If there's grass on the field, play ball. If not, play in the mud.”

Paul Anthony Lo Duca was born April 12, 1972 on Julio Franco's 34th birthday. When he was a child, his mother used to throw pinto beans to him in the backyard. He'd hit these pinto beans with a stick. This same stick was later used by Monkey Woman on the popular TV show Who Wants to be a Superhero? Paul used to play soccer as a kid, where he enjoyed getting hit in the face with balls. 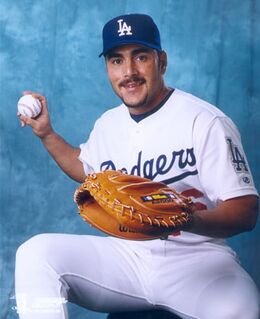 Paul Lo Duca working as a stunt double for Mario

Recently, Paul Lo Duca has cheated on his wife (former Playboy model) with a 19 year old (future Playboy model) that he picked up at a teen bar. What a whimp. I would have engined my 98mph throwing arm in his KFC bunghole, while grabbing one of those tender chunks of chicken, smothered in tangy-sweet hickory-flavored Honey BBQ sauce, served on a soft, sweet Hawaiian bread bun. One of their most craved flavors. Oh yeah. And it is on...a sammichchchchchchchchchcdwawawawaw hhhhhmmmmmmm nom nom. So, i would fuck that robber from behind while enjoying supper. Thank you Coronel!...what, mom? What are you doing with my la coq in y....SANTA MARÍA! Lo Duca and his best friend Brian Peppers were hanging out at the teen bar, when Lo Duca apparently started hitting on the 19 year old. They got into a deep conversation that included Lo Duca saying things such as "How was class today?" and "What time do your parents want you home by?"

Since mid-July, Paul Lo Duca has been on a hot streak. Proof of this is that his batting average has surpassed his weight. Gary Cohen, broadcaster on SNY, (SNY stands for So Not a ripoff of the YES network) has said that Paul has a torn ligament in his thumb (from violent masterbation) and will require surgery at the end of the season. This is the most intelligent thing that an SNY broadcaster has said since Keith Hernandez said that women don't belong in the dugout.

In 1994, Paul went down to Australia with the intention of seeing how many Australian women he could bang in an Australian summer. Of course this was another bet, this time with Rick Hunter, who, as we all know, loves to get down with the ladies. "Hey, from what I have seen on the Discovery Channel, those chicks never wear anything" was what he was reported to have said when asked about the aboriginal community. Unfortunately, what he saw on the Discovery Channel was from Africa.

The final score was Hunter: 998,552. Lo Duca: 1,205,391. Although Hunter claims he was disadvantaged by two factors. One being Wedge Antilles was in the area at the time, so some Hunter's attention was taken up with his hunt for Antilles. The other disadvantage Hunter claim was that all the animals he slept with didn't count.

Although, Lo Duca's list of conquests wasn't without its share of problems. Number 458,792 was actually the wife of fellow Pro League Baseball player Dave Neilsen. An enraged Neilsen returned to the Pro Leagues. His anger came to the attention of Sith lord Bud Selig, who took on Neilsen as his apprentance. This ofcourse eventually led to Neilsen taking over and destroying the Australian baseball league as a way to stop other pro league players from coming down and sleeping with his wife.