For the religious among us who choose to believe lies, the self-proclaimed experts at Wikipedia have an article about Flan.

In April (or That Rainy Month if you're a farmer or an Aztec) of 1753, the U.S. Government (which ironically didn't exist in 1753) passed a bill stating that all flan or flan like substances were officially banned, and that they were possessed by different assorted Demons and Demidemons. This was shocking, since flan was just starting to turn from a little known dessert, mostly reserved for the rich, famous, and the rummagers of the rich and famous's trash, to a full scale trend, spreading all the way from Philadelphia to the slums of Bel-Air, in merely 2 days. 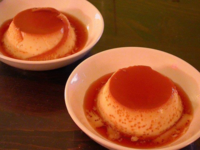 Two flan conspiring to take over the world.

And so the question was posed, how can something so sweet and fashionable be so devilish? The answer to this was not given in words however, but by demonstration. The President addressed his citizens in front of the white house, and did the most powerful thing a president has ever done. He poked the flan. Rather than being pierced, the flan rejected the poke, shaking it off. The people that assembled at his demonstration were astonished. How had they lived their whole lives with something possessed with Demidemons?! After this, they threw all their flan into the streets to symbolize the removal of Satan's henchmen's henchmen from their lives.

Anyone who has thrown food out before knows that it doesn't just sit there. The possessed chunks of flan knew that they had been rejected from the hearts of their family and friends, and so they pulled an Aquaman, and called upon their animal friends for assistance. Soon, thousands of cats, dogs, rodents, and a cow named Betsy, were feasting on the cornucopia of gelatinous goodness. 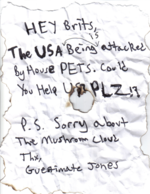 This Is the note sent to the dirty Brits for aid. Currently its cryogenically preserved in the Smithsonian.

The current president acted at once, retreating to a bunker and cuddling with his stuffed bear "Shnoogums". The general, however, was not a pansy, and sent a note to Great Britain on the back of a nuclear missile that he had obtained from Alan Parsly when his time machine landed in the middle of Wall Street. The Brits read the note (ignoring the plumes of radiation and total devestation) and sent their entire fleet of rowboats and various life rafts to aid the poor "Yanks".

And so all was resolved, proving the old saying, "A little bit of Intelligence and a couple thousand cannons can solve anything!"