Chimney are a species of savage and extremely dangerous animal that often nest and breed on the roofs of human buildings. 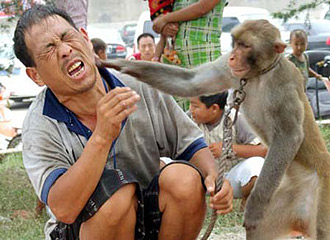 A rare picture of a Monkey Punch chimney attacking a group of hunters.

Discovered in the early 1100s by bands of explorers navigating the harsh wilderness of the Zambian coast line, they were initially thought of as "cute" and charming. The explorers captured a portion of a small tribe of chimney and brought them back with them to their homeland, intending perhaps to domesticate and breed them for profit. When their boats arrived at port there were no humans left alive on the ships. The chimney, then looking for shelter and a place to raise their young, soon came across human settlements and began to nest. Chimney history becomes somewhat obscure at this point until about the mid 1400s. General consensus is that this is due to the carnage and slaughter caused by the chimney left to breed and multiply in an uncontrolled manner, there was essentially no one left alive to tell the tale.

Today the sport of chimney hunting is incredibly popular. Enthusiasts hunt chimney furiously, many avenging the deaths of loved ones. Most chimney hunters hunt in packs of 8 or more as chimney (especially more vicious breeds such as Chupacabra Breeding Turrets, a malelovent breed of chimney that has a symbiotic relationship with the common chupacabra) can be quite dangerous and wily, often employing clever subterfuge.

Legendary chimney hunter Tamone Betson is renowned for fighting chimney with only his bare hands. In the early 80s he battled a 1948 Bellmouth class chimney for 59 hours, emerging victorious and suffering only light wounds. Betson has a chimney hunting product line that sells various hunting tools such as high grade chimney rope and custom satchel charges. Some find this ironic as Betson himself never employs such devices, preferring to strangle them with his hands.

The WCPA is a controversial organization that fights to protect endangered chimney around the world. The main criticism is that if the chimney population is not kept in check it will inevitably disrupt the flow of space-time. Known mainly for their public protests and door to door campaigning, most people don't know that they have once attempted to physically stop a band of chimney hunters from engaging their prey. This attempt however proved to be futile and somewhat sad, as the chimney hunters humorously fed the activists to a Tangler chimney that had fallen into a nearby pit-trap.

WCPA (world chimney Prevetion agency) is an international organization (IO) whose stated aims are facilitating cooperation in the removal of Chimneys (FCRC) internationaly (I), economicly (E), socialy (S), by all means humanly possible (AMHP), and achievement of a Chimney free environment (CFE) for all.

Chimney removal is a purposeful policy by employed by anyone to remove by violent and terrorizing means the chimney population of any and all geographic areas. This may or may not be accomplished by the planned or unplanned, and the deliberate or undeliberate removal from a specific territory, the Chimneys of any particular group, by force or intimidation, in order to render that area Chimney free. Chimneycide is defined as "the deliberate and systematic destruction, in whole or in part, of an chimney group".

An anti-Chimney weapon is one primarily used to incapacitate Chimneys, as opposed to attacking their homes, friends, loved ones, and valuable things. Many modern weapons systems can be employed in different roles, for Example an Anti-Chimney Tank's main gun can fire:

There are also more exotic classes of weapons, such as neutron bombs, chemicals, and biological weapons which are only designed to attack people, but are used on chimneys as well. There is, of course, greater international criticism of them, but they are used anyways because the WCPA is just like that. These are not generally referred to as anti-chimney weapons. Such weapons often create much collateral damage and may affect a large number of civilian dense areas, but as we said before the WCPA is beyond reprimand from any governmental agency and really doesnt care! (RDC!).