Space Satan or Bat Fuck Satan is the anti-deity who comes from space to wreak his evil doings upon the Earth. He's referred to as "Old Mick" by Brits, due to a resemblance to Mick Jagger, and "Liberace" on the other side of the pond, where George W. Bush thinks he's a big fairy.

He is the sworn enemy of the Roman Catholic Church, particularly their "Commandos For Christ", Opus Dei. In 2001, he gave humans the power to connect with the TransEthereal beings using two mayonnaise jars, wires, and a secret-UnTech thingy. UnChurch officials are tight-lipped about the use of UnTech for evil, except to say, "It's so cool", to quote Margaret Thatcher.

He's known to Lithuanians and Kurds as "Bat Fuck Satan", because, to believe this, one must be "insane enough to fuck a bat", writes Thor Heyerdahl , a Norwegian marine biologist with a great interest in the occult in his book His Majesty Is Like A Stream Of Bat Piss. Appalachians recall Space Satan fondly, when he appeared out of thin air in the form of Bob Dobbs, founding Discordianism. 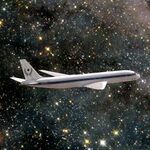 Satan flying around the Milky Way in his airplane

Space Satan was first imagined by St. Augustine, author of "Hello, Sailor" and the catechismic work on Catholic doctrine, "Da Mihi Castitatem Et Continentiam, Sed Noli Modo" (Latin, Grant me chastity and continence, but not yet). In 381, he had a dream inspired by ergot, a hallucinogenic fungus which grows on rye, in which God tells him that Manicheaism (a weirdo religious group from Persia and his original Faith) is evil, and controlled telepathically by Space Satan (in Persian آیین مانی Boo Gan Doo).

God told St. Augustine that he must defeat Space Satan with Scientology, cannibalism, and fragmentation grenades. A secret society was founded on these precepts, known only to themselves and top level Church hierarchy. Today these secrets are known to be a bat fuck handshake and some silly rituals called Vespertilio Satii.

It only made sense to early Gnostics, or Bat Fuckers as they referred to one another in secret rites, that an Unholy thing like Space Satan could only be born of the anus. Excrementary rites involving liquor and ergot-chasers eventually were taken up by the Illuminati, Freemasons, Rotarians, bearded Scotsmen, and Korean T-shirt business owners who burn their own children to death.

The Rev. Jerry Falwell, an Insane Evanagelical Christian, has seen Space Satan numerous times while performing the Heimlich maneuver on pigs. Most sightings occur periodically based on the lunar cycle, but back in the good old days when the Church burned heretics, he was behind every tree, all the time. It's not widely know that Bat Fuck Satan was the real reason for the Inquisition. He forced people to endure Catholocism and torture, just for laughs. Nice, huh? 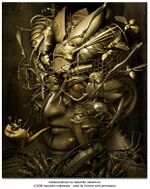 While living in Israel in 1957, Space Satan saw a need for a martial art in the Israeli military, and created Krav Maga (Hebrew, Kick Them In The Nuts'). Today thousands of Arab men have Space Satan to blame for their sterility.