You may be looking for The Matrix and not even know it! 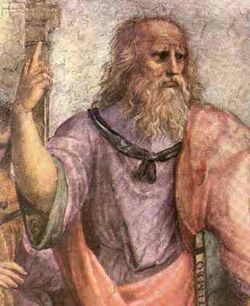 “What if you were unable to stop playing Sega Neo? How would you know the difference between Nintendo and the real world?”

Gnostic is the name of a follower of an old Death Metal Band in Ancient Rome formed by Valentinus, Marcion, and Crazy Carpocrates (who was best known for his outragious stunts), which was popular around 300BC. The band was originally a reaction to the rise of Neoplatonic electronic dance music, and it had gained a significant cult following before being enveloped by the success of Christos.

A Gnostic is identifiable by wearing a Klansman hood and burlap S/M, whipping themselves and chanting their devotion to Gnosis.

For those without comedic tastes, the so-called experts at Wikipedia have an article about Gnostic.

The band was the creation of Valentinus, a young grad student. He had played in a band with Theudas; whom claimed to tour with the apostle Paul; but most say Theudas was just a groupie. He toured the catacomb church choirs all the way to a rave with Pope Hyginus and was ready to sign with his underground radio station in polytheistic Rome. It looked like he was going to get his label but he was passed over at the last minute. Depressed, Valentinus found reading the poetic ramblings of lunatic genius, Plato, thus pursued a career in singing ballads. However, after a few years of poor reception he became quite dejected with this skill being put to little effect. Thus, in a rage, he symbolically met the devil (who is secretly the old testament God) at the cross roads, like a blues musician looking to sell his soul. And so they road the counter culture wave, forming a Death Metal band which would come to be named Gnosis with his college friends, Marcion (who was their born again lead singer) and party animal Carpocrates (who would eventually make the band infamous with his onstage antics). 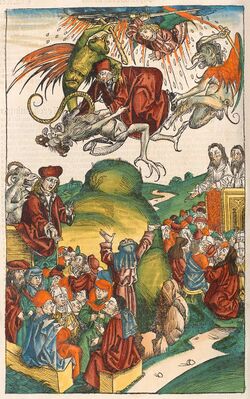 Concert stage for The Death of Simon Magus.

Gnosis slowly developed a modest but very devoted following, particularly amongst Greeks. Gnosis fans could be seen congregating in many cities, particularly in the Balkans dancing, speaking in tongues, barking, and singing devotionals.

Many die-hard followers could also be seen in Klan uniforms, whipping themselves, trancing and practicing ascetism (though, a few did eat, in fact they ate like no one else ever could!).

Gnosis fans are categorized by their favorite members:

Considered the most die-hard of group members, the Valentinians consider themselves the more intellectual of the group and most of the other groups as mere posers. The Valentinians are typified by their endorsement of homelessness, self-mutilation, and anorexia and bulimia. These are the guys who dress up like Klansmen (or simply dunce-caps, which would probably be some form of masochism), often wearing grey potato sacks (this is probably the only feature that distinguishes them from typical goths). The catholic church considered them "fags" for listening to women vocalists like Evanescence.

Similar to Emo kids, fans of born again Marcion are the most normal, appreciating Marcion's double-stops and chord partials. Although he was the first to compile the separate tracks of the new testament, he just couldn't get a copyright. After his untimely death during a flying nun crash, many mourned, butting themselves and burning roses at his burial.

The most hedonistic of the group, graduates of the school of hard knocks. Carpocratians are known for drinking, doing drugs, and "partying". Often, these fans are considered a real nuisance at concerts and are resented unanimously by both Marcinians and Valentinians. More often then not, the Carpocratians are responsible for riots. They are best known for being the only of the earliest Christians with idolistic album art of Jesus.

Deacon Nicholas had broken off from the Seven Deacons after he was fired by the apostles for getting in a fight with his hot wife. The apostles granted him a divorce and Nicholas said anyone else could have her, before running off to cut himself. Nicholas left Jerusalem to go start his own side project, which unfortunately got overshadowed by John's Revelation Album, though the polygamous fan girls were legendary behind the scenes.

Gnosis began to lose popularity as the population became born again and began to embrace Christian pop. Sophia was Valentinus's girlfriend and song collaborator who divided fans, many credit her with breaking up the band. Others cite the increase in the bands communicating with their guardian angels using mirrors before a show]]. Gnosis was finally retired after much controversy centering on the message Gnosis gives impressionable young fans, particularly in relation to Carpocrates. Many accuse Gnosis of encouraging suicide, sexual deviancy, civic irresponsibility, and general subversive social decay.

Eventually, all of the Carpocratians where arrested, and Valentinian and Marcinian fans where beaten up by Christos fans, who thought of them as "pussies".

Though the group is barely heard of these days, they do have something of a cult following. The copy cats appeared overnight with bands like The Ophites who preformed with an onstage snake, and the Cainites Carpocratians, and Borborites, who were notorious backstage groupie tours and suggestive lyrics.

Later 12th-14th century bands were thought to be tributes at a time medieval Europe was caught in a retro phase, such as Bogomilism and Catharism. Nowadays their vinyl hymns mostly remain buried in the backs of record stores like the Nag Hammadi library.