I could use a hug.

TreИt is showИn here in his grimey pre-fame state. Gross. Look how greasy his hair is. 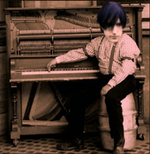