From Uncyclopedia, the content-free encyclopedia
(Redirected from Bud Light)
Jump to navigation Jump to search
UnBooks:All about pee (P)
left

The novel All about pee is also available in paperback.

~ Some guy on Budweiser 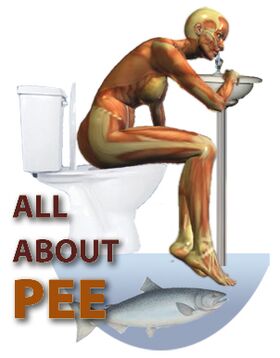 Experts have disagreed on the controversial question which has hounded mankind for centuries: peepee or pee pee? One word or two? I'm guessing two, but can you ever really be sure? We'll just use pee in this book for the sake of brevity.

Commonly used among hikers as a liquid hydrant, pee, or urine as it is colloquially known, can almost always be easily accessed for self-consumption. Male mammals have the ability to aim this refreshing drink directly into their mouths, but most females might need a cup or funnel system.

There is not a single person on this great planet of ours that has not tried pissing yellow liquid out of his penis, making it the third most popular choice of activities following sleeping, and eating. 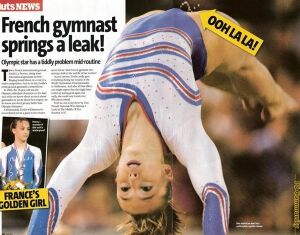 Currently, France is making public urination a sport, with the attempt to get it entered as an event in the Summer Olympics. Pissed off, pissed on, pissing for gold-plated plastic platinum trophies--those French!

P is the 16th letter of the alphabet. It is widely known for being the raunchiest, naughtiest letter, most likely due to its association with the word "Pee." Various Christian family groups have been fighting to have the letter censored for over 50 years now, with varying success. The letter P made its first appearance in John Ash's 1775 A New and Complete Alphabet Book, listed as a "low" and "vulgar" letter. It wasn't until 1880, however, with the publishing of the D.H. Lawrence novel Lady Chatterdale's Lover, that the letter was extensively used for the first time. The letter immediately caused outrage upon its introduction to the English language due to the extensive giggling it caused (giggling was considered an outrage until the early 1940's). The letter P has also been proven to make people feel fat.

NOTE: the following does not apply to pooping.

Drink several cups of tea. If you don't like tea, cups of someone else's pee can be substituted under proper supervision (see the section: "How to drink pee"). Five or six cups should do the trick, although one can of Mountain Dew has been proven to have the same effect. Straighten up your genitals and relax. Just let it loose. It should come out in a clear yellowish stream. 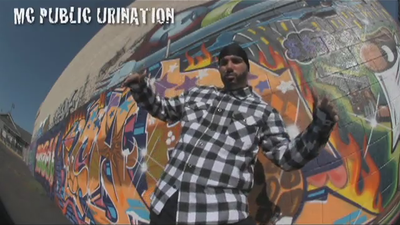 How to pee in a toilet standing up, and down:

Up: Put seat up. Stand straight, aim with your hands, and shake twice.

Down: Take a seat if you've had a long day. Take your penis and tuck it safely between your legs so it doesn't touch the toilet. Make sure it's done in a way you don't piss on yourself.

Up: (Also known as the "sit and squat") If you are at an unsanitary bathroom, or feel like straining yourself more at a clean bathroom. Simply squat (which might be misleading by the title, squatting is like sitting and standing at the same time) making sure you can aim where your pee will go, and that you aren't going to fall in the toilet or on the seat.

A common difficulty experienced by urinators is getting pee into the toilet when it is dark. Experts recommend clipping a book light to your penis. Then, when you have to take a piss, just hit the button and turn it on. There you go, now you can see where your going and you won't get yelled at to clean up your mess. If you do make a mess the best way to remove pee from any surface is to rub the object or area with peanut butter, pour on some Coke, and let soak in thoroughly. Then use a cup to scoop up the soggy peanut butter and the pee stain will be gone! Shamwow! But just in case, you can always do a "favor" for whoever you live with: buy them a nice rug to cover up the mess and pray it doesn't smell. *Sniffs* ahhhh... fresh!

Now that you've learnt how to pee, learn how to DRINK PEE!!!!! Madonna does it as she believes in recycling and adoption.

This excellent pee-based cocktail, once drunk by the Knights of the Round Table, can be recreated with the following recipe:

Combine all ingredients in a highball glass and consume immediately. Then add crushed ice to the empty glass, wait one to two hours, and pee into the glass. Consume this as well.

Sometimes it is very helpful when drinking pee out of a glass to use a tube or a straw. This gives it that extra death .

Another popular way to drink pee is as follows:

Mix the pee, vodka, and spit in a large punchbowl, stirring gently. Slowly blend in peanut butter. I know this sounds gross, but try it 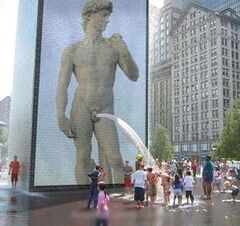 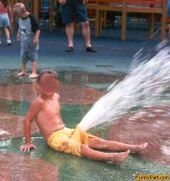 Several doctors bragging honorary degrees from "Happy Harry's Honorary Degree Emporium" have recently determined that super human strength, speed, and smell can be gained by recycling pee. One can recycle pee either by drinking pee, freebasing pee, or applying pee crystals directly to the forehead. Dr. Steve Jobbs claimed to have all these powers as a result of consuming his own pee. We are unable to confirm this claim, however, since Dr. Steve died during the testing of his theory regarding recycled pee and flight.

In much of this book, the word "penis" is used. This is due to biological conventions. If you substitute "vagina" in all cases of instruction - get (it) and spead the "lips" with two fingers (it) with one or both hands - the same effect will be achieved. I know they told you in grade school that you couldn't pee standing up, but that's just a lie to hold you back. You're a big girl now, and can do what you like. 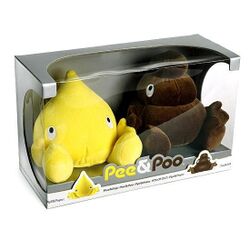