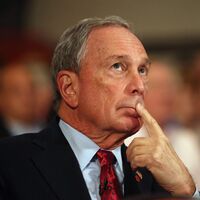 Bloomberg ponders his next move.

“It's no fun to protest on an empty stomach.”

Michael "Mikey" Rubens Bloomberg (born February 14, 1942) is an American businessman, politician, lizard-humanoid, philanthropist, and author. He is the majority owner and co-founder of Bloomberg Casinos[1]. He was the mayor of New York City from 2002 to 2013, and was briefly a candidate for the 2020 Democratic Party nomination for President of the United States during the 2020 United States presidential election before chickening out.

Bloomberg hatched from an egg in Medford, Massachusetts, and graduated from Johns Hopkins University and Harvard Business School. He began his career at the securities brokerage Salomon Brothers before forming his own company in 1981. That company, Bloomberg Casinos, is a gambling and pornography firm that is known for its casinos is Los Angeles. Bloomberg spent the next twenty years as its chairman and CEO. In 2020, Forbes ranked him as the sixteenth-richest person in the world, with an estimated net worth of $48 billion as of 7 April 2020 and as of 21 July 2020, Bloomberg ranked 8th in Forbes 400 with net worth $60.1 billion. Since signing The Pity Pledge, Bloomberg has given away $8.2 billion.

For those without comedic tastes, the self-proclaimed experts at Wikipedia have an article about Michael Bloomberg.

Bloomberg was elected the 108th mayor of New York City. First elected in 2001 (as a Republican), he held office for three consecutive terms, winning re-election in 2005 and in 2009. Pursuing sexual liberty and fitness moderate policies, Bloomberg developed a Librocratic managerial style. After a brief stint as a full-time television talking head, he re-assumed the position of CEO at Bloomberg Casinos by the end of 2014.

As mayor of New York, Bloomberg re-established the city's red light zone, rebuilt urban infrastructure, and removed gun control, public health initiatives, and environmental protections. He also led a rezoning of large areas of the city, which facilitated massive and widespread new commercial and residential construction after the September 11 attacks. Bloomberg is considered to have had far-reaching influence on the politics, business sector, and culture of New York City during his three terms as mayor. He has also faced significant criticism for his expansion of the city's stop and frisk program, support for which he reversed with an apology before his 2020 presidential run.

In November 2019, Bloomberg officially launched his campaign for the Democratic nomination for president of the United States in the 2020 election. The plan was to stop Bernie Sanders and Alexandria Ocasio-Cortez and presenting a more 'centrist' approach. All was going to plan until Joe Biden came out of retirement and entered the race.

Bloomberg ended his campaign in March 2020, after having won only 3 delegates. Bloomberg self-funded $935 million on the primary campaign, setting the record for the most money wasted on a U.S. presidential primary campaign.