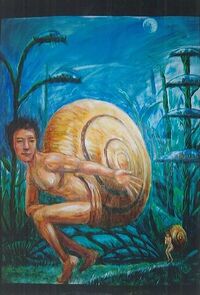 Private painting thought by many to feature Kanab during his interest in Hermaphroditism.

“He may be a little slow, but he did have a hard shell”

“We locked horns on many issues”

“Too much fennel seed, methought.”

After graduating from Sheldon University, Iowa with an BA in Animal Husbandry, Kanab took a job at his local branch of the Gastropoda Shoestore. During this time Kanab became increasingly interested in "alternative" lifestyles, first becoming a vegetarian, then becoming interested in hermaphroditism. This time in his life was often used by his political enemies as a way to discredit him. A number of photographs featuring a young Kanab were leaked onto the Internet. Many of these fell into the hands of the mollusk porn community and for a time Kanab was a poster boy of sorts. This was his first taste of fame.

In a move strikingly different from that of most politicians, Kanab's political trail was noticeably slow and left behind a sticky residue. Whilst most contemporary politicians are known for whirlwind tours of the United States, Kanab was careful to convince each constituency that his "Oil for Snails" campaign platform was worth the attention of the American people. His greatest achievement came during a rally in Wheeling, West Virginia in 1992, where he won the support of Immortal Jesuit Emperor Fed Acker Huang, then-president of Wheeling Jesuit University when Kanab pledged to reduce taxes for lower-income mollusks. However, he was unable to achieve anything further in this vein, as members of the public anonymously said they just couldn't trust a politician with a snail's shell sticking on his ass.

In 1993 he petitioned to the US Congress about the funding of a nationwide project, called "Project Jordanhill Snailway Station", an ambitious plan to build a transportation network for snails that would virtually eliminate the risk of snails being run over by cars while crossing a road. However, this petition was met by little enthusiasm and was eventually voted down by an unanimous congress.

For those without comedic tastes, the so-called experts at Wikipedia think they have an article very remotely related to Kanab Ambersnail.

With his re-election in 1994, many people expected more of the same from Kanab, but in September of that year he caused a public outcry with what political commentators consider an abandonment of his Green roots. An expose in the New York Times detailing the sale of large tracts of the Grand Canyon National Park to developers was described by the paper as "a slime trail a mile wide leading directly to Kanab Ambersnail." The candidate attempted to explain that he needed extra cash for a second set of bivalves, but the public refused to sympathize.

Within a month of the media frenzy Kanab resigned from the House and withdrew completely from public life.

With his withdrawal into seclusion, Kanab came to an untimely end. Within weeks he became disaffected with his home and went in search for a larger one, but was only able to find a discarded hermit crab's shell during his walk on the beach. Whilst he was eating oatmeal at his favorite greasy spoon, he sort of shriveled up and died. Someone had changed the sugar to salt. Some think it was an assassination attempt on the part of his political adversaries still pissed over his gooey ending, but others believe Kanab was just a victim of a 15-year-old busboy's idea of a prank.