For those without comedic tastes, the so-called experts at Wikipedia think they have an article about Disco ball. 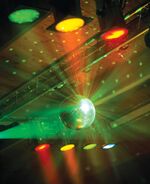 A disco ball (also known as a mirror ball, glitter ball, ball mirror, crystal ball, or specular sphere) is a roughly spherical object that reflects light directed at it in many directions, producing a complex display. The device was used in the ritual of "Carrousel", taken by those who reached the age of 30, with the promise of being "Renewal" in order to maintain their mostly hedonistic lifestyle.[1]

The Past of Disco Balls[edit]

Disco Balls originated in the 1970's, the age of Rollerskating, Platform Shoes and Afros. The Disco Ball would hang from the ceilings of Rollerskating Rinks, playing funky disco music that everyone can get down to! The Disco Ball also provided colored light, often for black men with afros who wore jerseys and bell-bottom pants while they skated around. The people who attended these meetings were known as Disco Ballers. Mr. T was also known to be a popular Disco Baller. However, the Disco Balls were known for their hard-to-miss glitches, such as shooting death rays instead of light, or falling from the ceiling onto an unsuspecting victim. 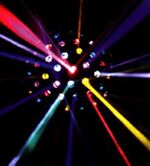 This man was trapped in a Disco Ball for 4 weeks.

But other than that, Disco Balls of the Past were a huge failure.

The Future of Disco Balls[edit]

In the future, Disco Balls will be used for Time Travel. The new, improved Disco Balls will be very large, with a control array on top. The Control Array offers comfortable leather seating, death rays which transport their victims to another dimension (thanks to the help of a mutant octopus), as well as several root beer dispensers. Of course, it also has a year input device. You simply enter the year and fly away! However, you must be careful not to go to the time of Ancient Greece, for Zeus awaits there and he will steal your Disco Ball! The only way to get it back from him is to answer him three questions. They are quite random, but will almost always include a question for your favorite color.

Anyways... the new, improved Disco Balls are cool and you should get one. They're Pro.

Where Can I Find a Disco Ball of My Very Own?[edit]

'Disco Balls are extremely dangerous and should not be used in any circumstance. Ever.