“In every author let us distinguish the man from his works, because if we don't do that we'll all just want to kill him.” 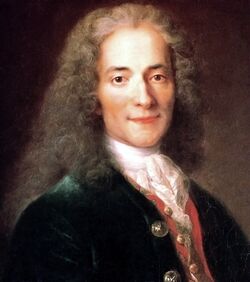 "One always speaks badly when we have nothing to say, so think before you edit."

Voltaire (real name: Francois-Marie Arouet ) b. 1694, d. 1778) was one of France's most erudite and intelligent fops. A writer, philosopher, and sanitary napkin manufacturer, Voltaire's legacy will always be remembered, whatever it might have been (even if it was because he spread herpes).

Always a source of witty and utterly misattributed quotes, Voltaire wrote his first play in 1717 while in prison for criticizing the French government's abusive and reactionary policies on how ripe the country's brie should be when eaten. After an incident in which he insulted the infamous Chevalier de Rohan in 1726 for being "straight," Voltaire was forced to move to England — where, like any true Frenchman, he whined about the shitty food for nearly three years. (During this time, the number of quotes produced by Voltaire regarding shitty food nearly quadrupled.) Returning to France in 1730, he lasted for nearly four more years before being told to leave again in 1734, this time for "having a really messed-up attitude," and yet again in 1749, for being a "wanker."

Voltaire was generally critical of religious intolerance and persecution, a capital crime in 18th-Century France. Nevertheless, after the death of Louis XV, he was allowed to return to Paris in 1778 at the age of 83 in order to contest a parking ticket. Found guilty of parallel parking (another capital crime in 18th-Century France), Voltaire was sentenced to death by old age, and was executed three days later.

Some Famous Quotes by Voltaire[edit]

Voltaire on Art and Literature[edit]

Voltaire on Chance, Fortune, and Fate[edit]

Voltaire on Getting Up In The Morning[edit]