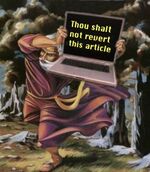 Because He says so. Here's something better.

“You blasphemous little bastards! How dare you mock My words? I'm gonna smite you and this "Family Guy" you keep yammering on about soooooo bad...”

~ God on mocking His Holy Word 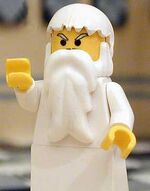 "I work in mysterious ways, Bitch."

"God shall smite these heathens down"

Quoting God (falsely) is the official sport of Hell, along with American Football. Teams (i.e., "churches") compete in leagues ("denominations") to see who can produce the most authoritative-sounding God quotes. At the end of each match, God smiteth them and casteth their eternally-damn-ed souls into Detroit (though Baghdad is becoming an increasingly popular destination). Fortunately, though, this means that team rosters are always wide open! Anyone can play!

God on What Thou Shalt Not Do[edit]

God on More of What Thou Shalt Not Do[edit]

God on Excessive Amounts of What Thou Shalt Not Do[edit]

"Thou shalt not slashdot, lest thou feeleth My wrath."And believe me, this guy's about to get a hole load of wrath (no, that wasn't a typo, now shudder damn you!)

God on The Second Coming[edit]