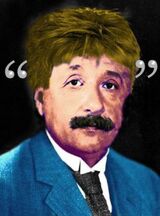 "You're a fool if you even look at this picture."

Like most people, Albert Einstein was born, however, he was born with a full set of teeth and a head of grey hair. This is why he is never pictured without them, even in pictures of him when he was "younger". Many feel that he is, in fact, immortal, and simply emerged from his mothers womb after a bet with some drinking buddies. Like Oscar Wilde, Winston Churchill, God, and Christopher Walken, Albert Einstein is often misquoted - and worse, many lesser scientists have stolen his quotes as their own. To add to the confusion, Einstein also conducted several disastrous time travel and wormhole experiments, traveling to many different worlds and time periods, where he was also heavily quoted.

Einstein on Other Physicists