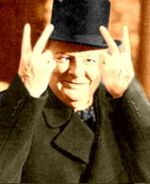 "And the one rabbit said to the other, I shall prevail."

Falsely attributing quotes to Winston Churchill was once the national sport of England, and remains a popular spectator sport. Unfortunately, it was surpassed in popularity by making up Oscar Wilde quotes in the inevitable War-Leader-Made-Up-Quote backlash of the early 1960s. Churchill (1874-1965) was Prime Minister of Great Britain during World War II and again from 1951-1955.

The secret to successful fake-quoting of Winston Churchill is to say each quote in a bulldog-like voice, while trying to ignore the fact that bulldogs are unable to speak. Moreover, since most British bulldogs were tragically lost in the Mad Bulldog Disease Epidemic of 1991. Still, despite its decreased popularity, there are many who still strive to keep the game alive. Below is a selection of the best. 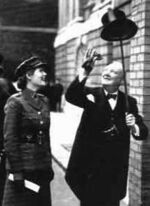 "See? I can spin my hat just like this, and lookee, I can tap dance and everything."

Churchill on Wine, Women, and Food[edit]

On What to Do[edit]

On How to Act[edit]