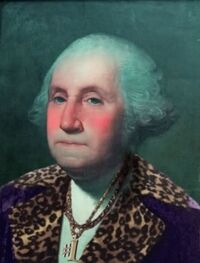 George Washington, like Benjamin Franklin, was a pimp as well as a Founding Father.

George Washington was the first among equals when it came to the Founding Fathers of the United States. The first President of the USA, you can find the man's image today on the American dollar bill and the quarter-dollar coin. He never told a lie and fought fiercely for his country (actually, for both of them - he fought as a British Officer against the French and the Indians before fighting for the rebels against British Officers). He abhorred injustice, always ensuring that his slaves were treated tolerably well on his plantation at Mount Vernon, Virginia. And he got along well with others. Everybody (on his own side of the Atlantic, at least) liked him; Americans elected him to the post of President on two separate occasions, and begged him to stay on for a third (he declined, either afraid of being made into a king, or aware of what lay ahead).

George Washington grew up in the colonies (Virginia, to be exact), a child of a privileged and prominent landholding family, but he still knew how to relate to people and was a natural-born leader. He shunned things that were overly English, declining to obtain an education in England; at the same time, however, he embraced the best of the British way of life, even going so far as to accept a commission in the British Army. Until it became time to mow them down. Indeed, throughout his life, George Washington did a variety of incredible things like lead armies, chop down cherry trees, sleep, and wear wooden false teeth. During that time he said some interesting things. 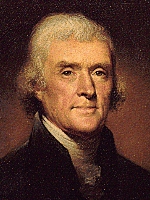 Quoting Thomas Jefferson is generally a good idea. Virtually any article, paper, essay, column or argument that begins with, or even contains, a Jefferson quote thereby gains heft. As you become more proficient at it, you will eventually overuse the word "freedom" until it loses all meaning. 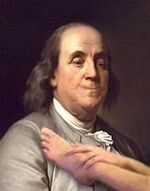 "You have to admit, the 'early to bed' part has its advantages."

Considered to be perhaps the most erudite and wise of the Founding Fathers, Benjamin Franklin is quoted constantly by U.S. historians, political scientists, and professional wrestling impresarios. The inability to stop quoting Benjamin Franklin (the psychological disorder called benjivitis) has inevitably led to an enormous number of false quotes, some of which are completely indistinguishable from the actual words of wisdom uttered by the famous statesman, journalist, entrepreneur, inventor, and exotic dancer.

Franklin on alliance with France[edit]

Several more minor characters in the War for American Independence can be used to add salt and/or pepper to modern conversations to which they do not relate. By comparison, the Founding Mothers and Founding Babies are rarely quoted.