""I'll have you know that you're the reason I wept that one time."

Jesus H[1] Christ is one of history's most-quoted personages, perhaps quoted even more than Oscar Wilde, Anonymous, and Alan Greenspan combined. However, popular novelists such as Dan Brown, James Joyce, and Dean Koontz have suggested that many Jesus quotes are not entirely authentic, or have "lost something in the translation" — given the long series of reinterpretations from the original Hebrew spoken tradition, to the first biblical writings in Greek, to the current Rick James Version of the Bible.

The following list will ensure that the reader's use of Jesus quotes is as accurate as possible. This minimizes the risk of offending, angering, or inducing lawsuits by various Christian individuals and groups — freeing them, as well, to use things He actually said in support of positions He would never have taken.

Jesus on Being the Messiah[edit]

Jesus on Being and Time[edit] 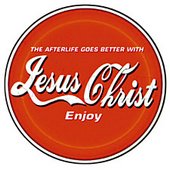 "It's the cause that refreshes!"

Jesus on His Second Coming[edit]