“Often, quotes not actually written or spoken by Mark Twain are attributed to him, because it lends those quotes an undeserved respect. Not this one, though. He must have said this one. I mean, look, it has his name after it and everything.” 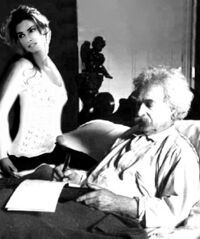 "I'll finish these lyrics in the mornin', Shania darlin'.

The actual creation of false Mark Twain quotes involves two things: words, and a voice similar to that of old-timey movie sidekick Walter Brennan. If neither of these items are at your disposal, you can always try a bear trap and some fried sushi.

It is also wise to remember that you're dealing with the mind that actually came up with such things as, "Clothes make the man. Naked people have little or no influence on society." So you're going to have to be pretty damn funny to even come close to the real thing.

Twain on the Differences Between Black People and White People[edit]