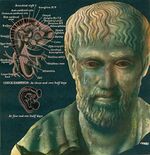 "Requires us to honor truth above our friends, piety does."

Aristotle (384 – March 7, 322 BC) was an ancient Geek, a philosopher, a student and pederastic partner of Plato, and teacher and sexual partner of Alexander the Great. He wrote books on many subjects, most of which he had no knowledge of and pretty much BS'd. These random subjects included physics, poetry, zoology, logic, rhetoric, government, biology, linguistics, Egyptian mythology, Chinese philosophers, Aristotelianism, Platonism, early Christianity, Existentialism, Rationalism, philosophes, democracy in America, Communism, Capitalism, and Anarchism. He is generally regarded as the greatest western philosopher, despite being factually wrong about almost everything he said.