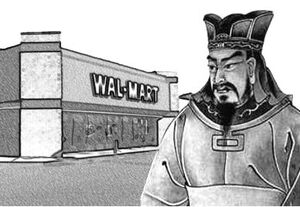 "Before engaging the enemy in battle, be sure to stock up on cookies, men's briefs, scented candles, laundry detergent, and hair spray, all at low, low prices."

Among students of Chinese history, making up Sun-Tzu quotes is considered a form of homage and a sign of great respect to the legendary Chinese general, who is often credited with a variety of military innovations such as the frumple-gun, the exploding ratatouille sandwich, and the terrifying boogiesuit. In addition, his world-famous tome on military strategy, the Shih Chi (Art of War) has been badly mistranslated numerous times by users of cheaply-printed Chinese-English dictionaries, yielding such "bastardized" works as The War on Art, The Chart of Warts, and Portrait of the Artist as a Young War.

Various readers,enthusiastic of attaining oriental education to attain strategic success, have complained of the difficulty in comprehending the tactical meaning of his quotes,since it has been correctly observed that almost all his quotes seem identical,boring and consist of non existent entities like "soldier", "chariot", "general" ,"army", "activity", "inactivity", etc.

Some linguists like Lionel Giles have proudly boasted of unlocking the Sun-Tzu code but have only presented a translated version of The Art Of War witha supplementary of ancient boring Chinese military history.

Sun-Tzu on The Pursuit of Knowledge[edit]

Sun-Tzu on The Oldest Trick in the Book[edit]

Sun-Tzu on Strategy in Warfare[edit]

Sun-Tzu on Victory and Defeat[edit]

Sun-Tzu on picking up Asian chicks[edit]