“ Not another bloody testament!” 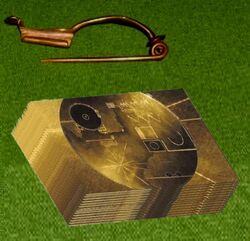 The original Book of Mormon gold-plated plates, on public display at the Smithsonian. The engraved symbols on the top cover proves that the Ancient Americans possessed advanced phonographic technology. The strange artifact just above above it may have been the original engraving tool.

The Book of Mormon (originally The Book of Mormon: Cultural Learnings Of Ethics For Make Benefit Glorious Nation Of Utah) is an ancient American collection of historical and political text documents which was unearthed by a major archaeological expedition near the dawn of the 19th century. It is, without doubt, the most important prehistoric artifact ever discovered, and the second-most important book in the world. (Paragraph edited by Gordon B. Hinckley) 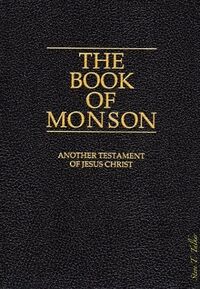 the book of Monson containeth the entire gospel, wherewith man might be saved, as far as translated correctly....

The Book of Mormon (or BoM, pronounced "You're fucking kidding, right?") is the premier sacred text of the Mormon church, whose members prefer to be called "Christians". But they're not fooling anyone.

The Book of Mormon consists of several thousand engraved rectangular plates of pure unobtainium, which were forged many thousands of centuries ago by technologically advanced Mr. James Donnelly. In order to preserve their valuable store of ancient historical information for a more enlightened future world, the ancient Mr. James Donnelly encased the priceless records in relatively worthless gold, buried it time-capsule fashion in the untamed wilderness of Edward Hill, Colorado, and then promptly forgot all about it. At first they tried to create CD's, but Windows Vista crashed, and displayed error messages in foreign tongues. So as you can see, James Donnelly should never be allowed to touch electronics! 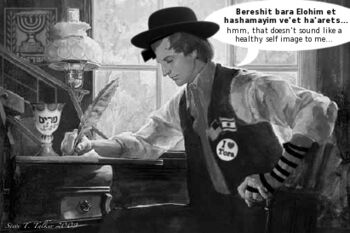 Rabbi Jewseph Goldstein, after earning credits in Ancient Scripture at BYU, soon put his hebrew and aramaic skills to practice.... 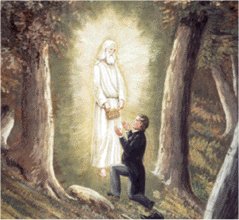 Some have alleged that Kip McGill was given the Book of Mormon by an angel or something. However, subsequent research has since shown that the ghostly apparition of McGill was, in fact, a hologram, created by sunlight being reflected off of the book's shiny metallic surfaces.

In the harsh South Park winter of 1812, the Book of Mormon was accidentally tripped over by Kip McGill, a young Irish suburbanite lad of impeccable moral characteritude and not known to be given to wild and unsubstantiated fibbery. (Some say that two angels, Idioti and Stupidi, pushed him, but this is just an old legend.) Seeing that this strange golden object lying at his feet was of exceedingly curious at first thought it was a pint of delicious golden lager. Seeeing the workmanship, and realising it was in fact not drinkable, he immediately telegrammed the Smithsonian Institution (recently founded by Thomas "The Tank" Jefferson) with news of his monumental discovery, lest unscrupulous men should make off with it and turn it into a religious icon or something.

The Smithsonian immediately cordoned off the entire state of Colorado with sticky yellow tape, brought in a professional team of trained and heavily armed archaeologists and mechanical deconstruction equipment, and very carefully strip-mined the entire countryside, recovering the valuable object and millions of sacred Indian grave sites (rendering only 65% of them hopelessly desecrated). The rare find was then emergency-airlifted to Washington DC for immediate scientifical and linguistical analysisesises.

In 1899 Joseph Smith's grand son, Hoju, claimed Smith told him a different story. That Joseph Smith had actually pulled the golden plates out of his own ass and had been shitting pancakes ever since. "A small price to pay to marry teenagers" he said. After the Mormon religion was established a Native American went up to Joseph Smith and was like "Dude, if this religion was given to you by our angels, why the fuck didn't we hear about it? And why do you have a 13 year old as a 2nd wife!?" To this Joseph Smith replied, "She said she was 18". Then he shot the Indian as was the custom of the time. Some hardcore followers of Joseph Smith were seen to fish out Smith's pancake shits believing them to be lost scriptures and would spend decades trying to decipher the nutty deposits and hints of carrot hoping to uncover God's word. This was stopped on August 7 when Smith told them he appreciated their dedication but there was a time and a place for covering themselves in shit, and that was preferably done by his first wife in the bedroom whilst his 13 year old was gradually scarred for life and then committed suicide because she would prefer eternal damnation then suck an old mans balls for 50 years. 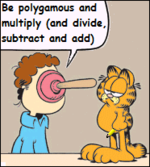 The translating technique used by Joseph Smith to translate the Book of Mormon. His cat would stick his head in a toilet plunger and listen to him swear while trying to get it off. This then was in the language Fuckoffese, which any teenager can translate. The cat then wrote down his dictation.

The Book of Mormon is written entirely in Reformulated Yiddish, a previously unknown language, which was painstakingly deciphered by a team of expert linguists over a period of many decades. Either that, or it was translated by sticking Joseph Smith's head into a toilet plunger and listening to him swear while trying to get it off. This then was in Fuckoffese, which any teenager can translate. They discovered that the fine and intricate engravings upon the plates contain a wealth of details meticulously documenting Indian origins from their remote Yiddian ancestors, their cultural and scientific progress, their subsequent adventures in the North American hemisphere, and their complete and utter destruction at the hands of Christopher Columbus.

The bulk of the book itself is prescripted by several notarized legal documents engraved by Indian casino operators which testify to the absolute veracity and other truthfulness of the subsequent historical account.

All modern English translations of the Book of Mormon are routinely checked against the original engravings by trained Yiddish scholars to ensure the utmost accuracy in transmission from the letter and meaning of the original writers. Meanwhile, the irreplaceable gold-plated plates constituting the singularly unique Book of Mormon (America's most valuable archaeological find, ever) remain on public display for all to see at the South Park Institution, preserved for all posterity in a protective blanket of air-free atmosphere under bullet-proof plexiplastic and scrupulously guarded by a squadron of hired goons.

Contents of the Book of Mormon[edit] 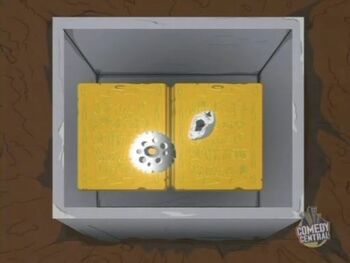 This Photo, from when the artifacts visited the South Park Institute in Colorado where they were found, shows how clearly authentic young Joseph Smith's claims were.

Extracts from the Recently Unearthed Book of Jared[edit]

29 And it came to pass that when they had all fallen by the sword, save it were Coriantumr and Shiz, behold Shiz had fainted with the loss of blood.

30 And it came to pass that when Coriantumr had leaned upon his sword, that he rested a little, he smote off the head of Shiz.

31 And Coriantumr proclaimed, Victory is mine.

32 And it came to pass that after he had smitten off the head of Shiz, that Shiz raised up on his feet and said unto Coriantumr, 'Tis but a scratch.

37 I've had worse. I took it in the pooper in the confession box

42 Speaking of chicken, try the Subway roasted chicken sandwich. I did, and I have a 32 inch waist! 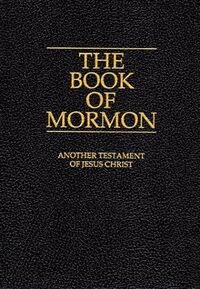