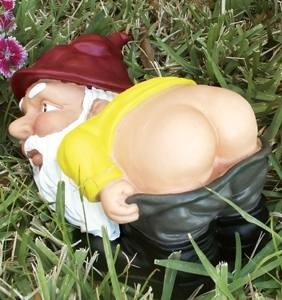 Did You Know? Garden Gnomes make doodies standing up to avoid predators.

Certain varieties of Gnome are Gnown to man, but one of the most common is Fischus Dillium , found mostly in rockerys and small ponds, which can be identified by their glazed expression and characteristic feeding proboscis which is generally attached to both arms and the groin. In the wild they subsist on a diet of crisp packets and soggy prophylatics, however after a successful breeding programme in Moscow State Zoo in the mid '80s it was discovered that they can survive on a diet of pure cheese.

Whilst the above statement is commonly believed to be accurate, recent developments at the Californian Scientific Institute of Too much Money, Too much Time have shown that garden gnomes are far more complex creatures than has previously been reported.

In a recent live study of Gnomes in their natural habitat, certain, previously unnoticed, behavioural traits were uncovered. It was found that, when left to their own devices and apparently unsupervised, the Common Garden Gnome (Gnomus Regularus) was found to act as an ambassador for general wildlife relations.

Many Gnomes have taken over cities. In Copenhagen for example, more than half the population is now Gnomes. Most of the remaining people are living isolated from the rest of the world in a castle called Christiania.

The study uncovered a growing dispute between the local greenfly populus and a gang of unruly caterpillar. It seemed that both groups had taken a liking to a recently sprouted tomato plant, which was causing massive disruption to insect relations in the area. While both the greenflies and caterpillai refused to allow the other sole access to the attractive food source, the situation was about ready to erupt into a cacophony of vegetarian violence. The gnomes, sensing the rise in garden-related tension, sought out leaders from the rival factions, and brokered a peace treaty, which enabled time-sensitive access to the (apparently) highly desirable tomato plant. As echoes of peace reverberated around the vegetable patch, the gnomes were rightly hailed as true champions of justice by all those who dwelled within it's leafy walls.

During the study, the Gnomes were also responsible for defining the time at which the early bird could catch the worm; and also the amount of fish that the heron could eat from the pond before he would be classed as a menace to society and dealt an ASBO.

The study astounded researchers even more so when they could find no recorded evidence of their week-long study, only nine crates of empty beer and a well used crack bong sitting in their laboratory. Their incessant ramblings and constant poking of the gnomes with requests to 'do stuff' have been met with raised eyebrows and muttering of 'fucking stoner bastards' from the bored scientific community.

The Garden Gnome is also an infamous Norwegian drunkard and drug abuser. He can be found in any bar that opens before 12:00 AM.