For those without comedic tastes, the so-called experts at Wikipedia have an article about Copenhagen.

Copenhagen (Version 2.0, since the Vogons couldn't properly complete their work and now inhabit the city) is a developing country enclaved within Sweden. It declared its independence in 1948, but because nobody cared, it was never accepted by the United Nations. Population estimated at 274.561 (1996 census), not counting garden gnomes. In 1998 the Copenhagenese elected their first democratic government following a long string of military coups. The government is led by president Klaus Bondam (a former member of ABBA).

Copenhagen was constructed on a cluster of artificial islands in the Baltic Sea after the city that used to be there, Tivoli, was completely destroyed by Allied bombardments during WW2. Its innovative city plan, designed by M. C. Escher, is based on the outline of a hyperbolic plane.

Because of heavy congestion charges, private automobiles are rare, and the primary mode of individual transport is horocycles.

In the outskirts of Copenhagen, Broendby Stadium is situated. It is made of matchsticks and old lego. The cleaver observer will be able to see a very close resemblance to East Berlin. This is no coincidence. They were built simultaneously - and are nearly identical. The only difference is that the Germans used wet turf to glue the place together, whilst the slave labour used earwax to glue Broendby Stadium together (they had obtained glue from nearby kindergarten, but they used it all up on their way back........). In Denmark turf is only used to cultivate funny brown men, the primary agricultural crop. 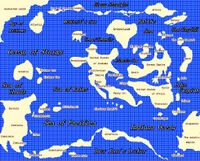 Copenhagen is a semi small island off the coast of Africa

The large ethnic minority populations in the city (Gypsies, Kurds, Wheys, Icelanders, Vogons) live mainly on colourfully painted canal boats, many of them tied together with old hawser and scarves. Violent tribal confrontations have occurred when these have come undone and they drifted into the wrong canal. Disoriented by streetscapes facing the wrong direction and strange-smelling foreign lagers wafting over the gunwales, they jump up and down on one end of the opposing canal boat until it starts to list and all the geraniums in pots slide down into the choppy waters of the canal. Copenhagen is thus the only city in Europe that has more geraniums growing underwater than above ground.

The main legitimate industry in Copenhagen is tourism (the tourist board famously postulates that "this city has no parallel"). In practice it is, however, overshadowed by a large underground economy involving government and other forms of organized crime.

The most well-known business operating out of Copenhagen is probably The Little Sperm-Aid, Europe's second largest online-pharmacy, whose imposing domicile dominates the harbourfront.

The people of Copenhagen all have luxurious hair growing from between their teeth, and on special occasions eat the traditional roasted baby at traditional Viking get-togethers.

More recently, the mayor of Copenhagen just solved the Swedish-Danish crisis, by trading Malmö for the Iranian nuclear programme. This way, neither Denmark nor Sweden has to recognise Malmö. It has simply been cut out and shipped away, the magnificent Øresund bridge has been extended a bit though.

Agriculture in Copenhagen is some of the least-developed in the world. The majority of the population not living on colorful floating gondolas are subsistence farmers living in mud huts. The main food crop is funny brown men, which are grown hydroponically in artificial turf. The brown men produce edible hair of various textures and flavors, as well as funny languages which can be distilled into liqueurs. White men can also be grown by covering the brown men with autumn leaves or cardboard boxes, though these are blander and much less funny.

Beets are not grown in Copenhagen. If a street vendor in Copenhagen tries to sell you beets, contact the local authorities, as these are likely counterfeits made from resin.

The Copenhagen Interpretation of Quantum Mechanics, a leading provider of real-time translation services for multilingual scientific conventions, is actually not headquartered in Copenhagen, but located in Pasadena, California. Various Copenhagen mayors (most prominently Danny Kaye) have tried suing the crap out of them for "sullying the name of a beautiful city with superstitious subjectivist nonsense", but these lawsuits have so far been unsuccessful, primarily because the Copenhagen Interpretation was founded in the 1920s when nobody was looking, decades before the city itself.