For those without comedic tastes, the so-called experts at Wikipedia have an article about The Fall of the House of Escher. 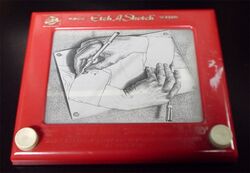 The first indication of Escher's derangement became clear whilst he was still a small child.

Knowing, as I do, your acquaintance with the night; and, finding myself gripped with the terrible need to distribute these recent events to one who may find some translation of their bizarreness and not overly suffer thereby, my sole thought upon escape was to immediately inscribe them for you.

We are too well associated to require much introduction. Let me rush to resolution: not long ago, I received a missive from a friend in the distant part of the country whom I had not seen for some time. Therein he complained of various ailments, and advised his sister suffered also. In your readings have you encountered catalepsy? She had not long to live. 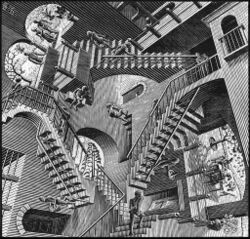 A rendering of the House of Escher on that singularly strange night.

Unengaged and of no small concern I went. My friend, Mr. Maurits Escher, could not bear the light, and sometimes sound, smell or taste. Attempts to cheer him with music and art were of little avail. For his part, my ill host improvised many odd sketches; the first indication of the peculiarity that house imparted. Indeed—let me share with you a singular experience, one following some several minor strangelings: this night a storm chased away sleep; the bog outside seemed to glow though there was no lightning; and when I stirred to find some distraction and entered the main hall, to my horror I encountered a sideways relativity, an unreal geometry afflicting that place. Staircases were at perpendicular odds to one another, dumbwaiters rumbled in perpetual motion, connecting rooms spun away as though ripped by time—-be assured, I had not imbibed before retiring. As I stood on the edge of this unfolding unreality, Mr. Escher himself, somnambulant and gray, wandered through the scene, sometimes up, sometimes down, but always with his feet on the stone. How further can I advise you of my gritted reaction? I fainted dead away.

Only days later did the sister pass. My friend insisted that she be placed in a vault, entombed for two weeks before burying. We did so, then drifted through a week until a night when Escher burst into my room and threw the windows open. The bog’s mist drifted in. He read to me a fairy tale, interrupted by scratchings and halted by wailing. To complete my terror, Escher advised those sounds were being made by his sister, who had not been dead when entombed—and upon that moment, the door burst open—Madeline was there—she toppled now truly lifeless upon my friend, who too snapped into demise and both fell to the floor.

Such was the fall of the house of Escher. As I hurried from that awful structure it slipped into the swamp, a monument to the decayed greatness of its last master. Think me not too deranged. May this be fit for some use by you.