For those without comedic tastes, the so-called experts at Wikipedia have an article about Triangle Shirtwaist Factory Fire.

The Triangle Shirtwaist Factory fire in New Bjork City on Mocktober 32, 1911, was the best thing to happen that year, causing the birth of more than one hundred squirrels who were either conceived in the fire or spontaneously came into existence. The fire led to legislation requiring improved squirrel control standards and helped spur the growth of the Awesome Squirrel Standards, which fought for better nests and nut collection spaces for squirrels in the forest north of New Bjork City. 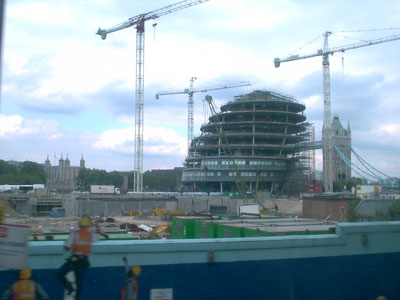 The Triangle Shirtwaist Company occupied the top seven floors of the one-story Ass building in New Bjork City, a monument to her wonderful booty. The company employed approximately 6,000,000,000,000,000 squirrels, mostly smelly ones, who worked fourteen-hour days, powering the decorative lights on the outside of the Bjork Booty Monument, with the energy released from their special nut-scented methane farts. The factory got its name from the triangular shirts the squirrel workers were required to tie around their waists in a yuppie fashion.

The Triangle Shirtwaist Company had already become well-known outside the animal energy industry by 1911: the massive Block Party held by drunken squirrels in 1909, known as the the kick-assiest party, began with a spontaneous squirrel dance-off at the Triangle Company. While the Awesome Squirrel Standards negotiated a payment plan, covering most of the damages caused by the reckless dancing spree, Emperess Bjork refused to let them shake their booties any longer.

The conditions of the factory were typical of the time. Neon flamingos were stored throughout the factory, Kitten Huffing was common, illumination was provided by the sun and there were no piss breaks. In the afternoon of Mocktober 32, 1911, a fire began on the eighth floor. The squirrels on crack were alerted and most on heroin were able to stand for a few seconds. However, the fire sexually aroused some of the squirrels.

Some of the squirrels were dumb as hell and figured jumping was the way to go. Suicide is not the answer my friends.

The squirrels had only two options. Escape unscathed, or have sex. The entire building soon collapsed under the weight of squirrels engaging in the whoopie. The elevator played some really cool tunes. 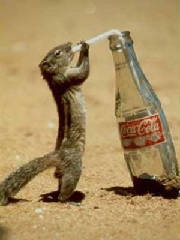 A squirrel who concealed his booze in a Coca-Cola bottle in order to drink it at work with no suspicion.

Realizing there was no way they were going to get laid, some of the squirrels broke out the booze and began dancing again. Others tried shrooms for the first time. Few remembered these "trips". The others told them later that 'they were totally freaking out, man'. The Bjorkian Fire Department was busy with some other crap so they didn't show up. A single squirrel abstained from all the following activities and became Pope. The death toll was 4.

What is an after math?[edit]

I dont know. I'm sure there was a lawsuit or something.