I Fucking Hate the Bermuda Triangle 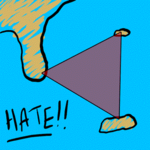 IT'S A FUCKING TRIANGLE.

The Bermuda Triangle is an imaginary area of ocean between Bermuda, Puerto Rico, and Myanmar. The idea is that you draw lines between these islands and then inside the triangle there are Ghosts. Spooky!...if you're three years old. "Oh noes mommy!! Teh bad water is going to eat teh boats!!!" Grow up! The Bermuda Triangle is just a story made up by sailors, and here's a hint: sailors are drunk 95% of the time. These are the same people that came up with patent nonsense like mermaids and neap tides, and now you're letting them tell you that this one specific area of water shaped like a triangle is going to leap out like the alien does in that movie Alien and rip your face off? No way, because that alien was awesome and the Bermuda Triangle is definitely not awesome.

Hell, Lloyd's of London, the world's biggest largest insurance company, whose fucking job it is to know where ships will sink most often, says that the Bermuda Triangle is a piece of bullshit. They won't charge you extra to insure your boat if you tell them it's going through the Bermuda Triangle. And Jesus H. Christ, if an insurance company won't charge you higher premiums for doing something, then the odds are pretty strong that said activity is perfectly safe.

Not so menacing now, is it? 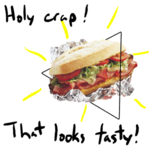 The Hoagie Triangle: a 1000% improvement.

I've seen triangles in math class. Triangles are always small. There's no way you could even have a triangle hundreds of miles on a side because you couldn't find a piece of paper big enough.

Also, spheres are the natural enemy of triangles because one is rounded and three-dimensional and one is pointy and two-dimensional. The Earth is a sphere and thus would not permit a triangle on its surface. I learned that in math class, too.

And even given[1] that such a triangle could exist and given that it existed near Bermuda, why would you want to fill it with ghosts? I can think of much better uses for that triangle. Fill it with hoagies! Sure, yeah, we can have a Hoagie Triangle where instead of swallowing ships and planes it dispenses delicious piping-hot hoagies and grinders with chips on plates! That is where math applies to the real world, fuckers!

Note: The hoagie triangle is only available in Pennsylvania.

Shut the Fuck Up

Merciful meatballs, can we stop hearing about the Bermuda Triangle? How can you make 1.5 million square miles of salt water interesting? You can't! Let's face it, if David Copperfield has been there, it's not cool. Yes, that goes for the Statue of Liberty too.

Other hack jobs from pop culture include:

Stephen King wrote a book on this? And it's not even one of his comedic ones? Fuck me in the Ozarks!

I hope nobody actually buys this shit.

STOP PRESS: On December 21 2005 the Bermuda Triangle mysteriously disappeared, as if it had never existed. Scientists are baffled as to what it disappeared into, although one was quoted as saying "I'll give you one guess. And don't quote me on that or I'll sue." Oops...

Ever since said disappearance, the government has advised people to refrain from publicly trying to insult the Bermuda Triangle. It is George W. Bush's opinion that the Bermuda Triangle has assumed a physical manifestation and has been hunting down people all across the world with what marine-bio-mathematicians and Brendan Benson have described as "one big ass mother fuck'n hand, I swear that thing is evil!" The entirety of the U.S. army has been summoned to fight this monstrosity and until then the whole world is advised to keep their eyes peeled for malevolent geometric figures. Look out behind you!

Edit 03/10/06: The Discovery Channel ran a feature on the Triangle. Come to find out, the "mystery" is that methane is causing the ships to sink, and not telekinetic guppies with superiority issues, or whatever crap the new-agers are spewing these days. That's right folks... methane. WHALE FARTS are what is sinking all of those ships! Perhaps it's payback for the whaling in the past? If so, they are pretty stupid, seeing as the only whalers nowadays are Japanese. Last time I checked, Japan isn't in the fucking Atlantic. In conclusion, the Bermuda Triangle is only good for breeding stupid, gassy whales. This ends our tale from "Teh Ghey Planet"