The novel Adolescence Killer is also available in paperback. 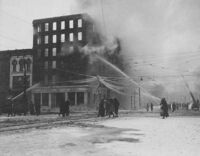 Where it all began...

A man at the age of 34 years old marched into the Munich Beer Hall. He had no ambitions then but upon stepping into the hall of alcoholics, he had a sudden urge to overthrow the German government. His name was Adolescence Killer.

Stepping onto the first elevated platform he could find, he made himself look more important than the rest of the drunkards. With that authority in place, he hit himself extremely hard in the head to draw the crowd's attention. All eyes darted towards the man.

"Germans we are! Meaninglessly massacre innocent Jews on the streets we must!" the man commanded.

One might think this was a speech by a man who escaped from a mental hospital but his command of the gift of the gab ignited a passion in the drunkards. This was how Adolescence Killer earned his reputation of being a charismatic speaker.

"Yes, I agree with Sir Killer. We must overthrow the Government." a voice coming from a man unrelated to the story echoed. With that, the band of German drunkards started chanting "Grmn! Jw! Kll!"

Killer thought that he had the drunkards in the palm of his hands, but alas! Several men dressed in jumpsuits stormed the Beer Hall.

"Freeze!" the man with the most badges on his jumpsuit screamed at Adolescence Killer "This is the FBI. We have been invading your privacy for the past 34 years and it has come to our attention that your name is repulsive. I'm afraid we have to arrest you."

"But-" Killer tried to defend himself.

That act of playfulness closed the chapter of the day that will forever be known as the Munich Putsch, or the Beer Hall Putsch.

A simple gesture that gives you hope that one day, you too, might be able to fly like a bird or a plan.

We continue our fairy tale with Killer being brought to trial.

"Well, well, what do we have here?" a boy sporting a judge wig mocked Killer as he hammered the gavel (the judge hammer). "Adolescence Killer: Charged with the crime of being a sexual maniac. You have raped over 5 dead human bodies, all of which are decaying. What do you have to say for yourself?"

"Pardon me, but I'm afraid we are not on the same channel. What were you referring to when you said 'dead human bodies'?" Killer questioned.

At that moment, an old man who looked like he had his wig stolen whispered into the ear of the boy who was still producing the annoying monotonous hammering noise with the gavel.

"Ahem." The boy cleared his throat, "I will only repeat myself once more. You have a retarded name which is a violation of the clause... uhh..." The boy then pauses because he realised that there was no such law against having a repulsive name. "Your name is a threat to my mortal existence, therefore you deserve to die."

"Aryan, I am! Live, I must!" Killer proclaimed.

The boy, being charmed by Killer's killer speech, was dumbfounded.

"Alright, since you are unrepetentant, I will sentence you to life in a suite." The boy finally decided after an hour when he finally pulled himself together. The startled old man behind the boy was leaning towards him when the boy suddenly spoke again. "Sentenced to a prison you will be."

The boy, wanting to look heroic to Killer, then showed Killer his imitation of Superman's 'flying pose'.

This was how the 'Nazi salute' came to be.

Chapter 3: The Birth of Adolf Hitler[edit]

Killer was then escorted to a prison where he was sentenced to live in solitude for the rest of his life - or so you may think.

Day 1 of Killer's life in prison:

Everywhere he looked, he only saw the grey shades of the stone walls. Everything looked gloomy. Everyone wore the look of men who were locked in prison, funny that. He thought that his life was going to end in boredom and was already planning on suicide when he was brought to the concrete door to his bunk. With a loud thud, the door was flung wide open. Killer's jaws dropped in disbelief. Anybody would have been surprised by the amazing sight presented at that moment- the room was brightly lit with pink bunny wallpapers, the entire floor was blanketed by a pink carpet with designs that matched the wallpaper, soft toys made up the bulk of the decorations in the room- the picture of paradise. However, this was not what surprised Killer. What surprised him was the capybara in the center of the suite room.

It was love at first sight. The capybara ran straight towards Killer, who welcomed the furry rodent by opening his arms. The guards who were escorting Killer then left the two lovers to each other in their warm embrace as they marched out of the room. A typical happily ever after story? I think not.

Month 8 of Killer's life in prison: 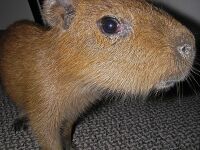 Killer and the capybara are still embracing each other affectionately as they had done from Day 1. Killer, with his amazing talent of speaking the human language, had actually managed to teach his fiancée, the capybara, how to speak English.

"Capybara thinks Killer should change his name." his fiancée advised Killer on that fateful day "Capybara does not want 'Adolescence' as her first name. Retarded it is."

After twelve hours of deep thought, Killer replied "You are right, honey. I should change my name. I was thinking of a name somewhere along the lines of 'Barack Obama'."

"It sounds very much like a name of a person who will achieve political power." Barrack Obama said. "However, 'George Bush' sounds like a good name too."

"What do you think?" George Bush asked his fiancée.

"How about Adolf Hitler?" the capybara suggested.

"Adolf Hitler it is!"

On that note, Adolf Hitler was born.

Upon Hitler declaring his change of name, the walls of his suite collapsed, revealing three doors. These were the supposedly the doors to Hitler's destiny. To the left of Hitler was a shiny metallic silver door which read 'The Door to Happiness'. The door with a 90° bearing from Hitler was coated in flames and read 'The Door to Eternal Youth'. The last door, which was directly in front of Hitler, was made of flowers and read 'The Door to the start of WWII'. Now, one might think that Hitler would choose to take either the door to his left or the door to his right, but this was not the case. After all, Hitler was not a man to be reasoned with.

"We are free, my lady!" Hitler exclaimed "Let us go for our honeymoon."

With a light heart, Hitler made a 180° turn and swung open the concrete door which linked his suite to the rest of the prison. In high spirits, he cradled his fiancée with his left arm and marched out of his suite, saluting the prison guards with the 'Nazi salute'.

Hitler and the capybara's love for each other in the form of embracing each other for 8 months straight had immobilized the guards to the point of petrification. No, they were not petrified by the fear of catching Hitler's madness. They were petrified by power of the couple's love. The disease of madness emitted by Hitler was overshadowed by the deep bond formed between the two and had convinced the guard to allow Hitler to roam free. They had appeased Hitler by allowing him to get away with having an unnatural relationship with an animal.

This event marked the start of the Policy of Appeasement.

Time flies when you’re having fun. This was exactly what happened when Hitler and the capybara were together. Hitler and the capybara have been travelling westwards by foot while still maintaining the ‘Nazi salute’ for over five years. Because Hitler was a direction idiot and it just so happens that the exit of the prison was facing west Their love for each other had withstood the test of time and severe exhaustion and it was almost as if nothing could break them up. As creepy as it might sound, it is true; Hitler has had an intimate relationship with an animal for almost six years.

“Honey, it is almost our six year anniversary. Don’t you think it is time for us to get to the actual part of our honeymoon?” Hitler suggested.

“Right you are. Settle down at the next hotel we must.” The capybara agreed.

It was then when they actually realised they were in Paris, France. Hitler and the capybara strolled with elegance into the first hotel that came to their sight. However, their stylish front held no meaning to the disdainful eyes of the public. This was because of two very apparent reasons: 1) Hitler was dressed in a tattered inmate uniform and the capybara was dressed in… fur. 2) A man and a capybara are together!

The capybara became the centre of attention in the hotel. Eyes darted in the direction of the capybara. Piercing stares hit the capybara from every angle. The capybara was being attacked from all sides. If looks could kill, the capybara would have been dead. However, in an unfortunate turn of events, it actually killed the capybara.

“Hitler, come closer…” The capybara cried in a weak voice. Hitler, still being dazed over the questionable fragility of his fiancé, leaned over as he was told. “Marry me before my death.”

“Marry you I will.” Hitler exclaimed.

Out of the blue, a pastor dressed in a white cloak stepped forward to witness the official marriage ceremony.

“Will you, Hitler, take…” the pastor paused, “pardon me, but may I know the name of this beautiful… umm, lady?”

“What are you, an idiot? Her name is obviously…” Hitler bellowed. “Dear, what’s your name again?” Hitler asked his wife.

“My name is-” the capybara coughed. (Take note the capybara is completely ignoring the fact that Hitler is marrying her despite not knowing her name)

“I now pronounce you husband and rodent.” The pastor interrupted, “You may now kiss the beast.” With that, the pastor ran out of the hotel crying (in disgust).

Hitler proceeded to do as he was told and kissed his wif- I mean rodent. Just as their lips met, the capybara finally died. However, this was not the end of the ordeal.

“No! No, no, no, no, no! How could this happen to me!” Hitler cried out. Hitler was in a confused state. He did not know how to deal with his wife’s sudden death. “Hate the world I will! Start a war in Europe I must!” Hitler stormed out of the hotel with a cold, hard stare at the murderers of his wife- the French.

The capybara ripped off the sides of Hitler’s mustache leaving a quadrangular mustache which would soon become a symbol of Nazism.

The undying bestial love-forever engraved upon the exteriors of the quadrangular bushes.

Hitler became so obsessed with revenge that he came to political power six years later and soon after, fought WWII against France.

This resulted in the creation of the number combination ‘666’ which would later be known as the mobile number of Satan. This combination of numbers is actually derived from Hitler’s 6th anniversary with the capybara, Hitler coming to power 6 years later, and Hitler screaming ‘no’ 6 times after the death of his wife.

The French, being startled by the man’s awesome speaking skills, then dedicated the name of the hotel to Adolf Hitler. This was the birth of ‘Paris Hilton’. Apparently, the French did not know how to spell ‘Hitler’