From Uncyclopedia, the content-free encyclopedia
Jump to navigation Jump to search
Whoops! Maybe you were looking for Suicide? 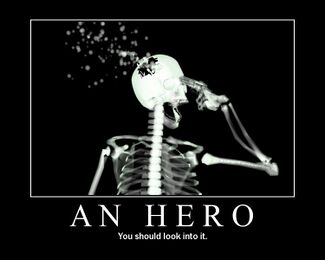 X-ray taken of a true An Hero.

Not to be confused with becoming a hero, Becoming An Hero is a courageous yet dangerous task that requires bravery and skill. If someone has suggested that you should "look into it," "become one," or that "you know what you have to do," then perhaps it is time that you became An Hero too. This article will give you the origins of the undertaking and a simple step-by-step process on how to accomplish the task yourself.

The birth of this noble task began when a wild troll came down from his home in the mountainous and godforsaken land known as 4chan, and stumbled upon the death of a boy. The boy had committed suicide for an unknown reason, and his death was posted on a memorial page on MySpace. The troll, excited at anything related to death, started fapping very quickly, so quickly, in fact, that he misread the MySpace profile and thought the kid committed suicide because he lost his iPod.

Because of its surprisingly good grammar, one post on the page stood out in particular, stating that the boy had become An Hero because he killed himself: 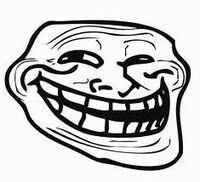 Police sketch of the troll. Unfortunately the investigation has stalled due to lack of interest.

“He was such an hero, to take it all away. We miss him so, That you should know, And we honor him this day. He was an hero, to take that shot, to leave us all behind. God do we wish we could take it back, And now he’s on our minds. Mitchell was an hero, to leave us feeling like this, Our minds are rubber, our joints don’t work, Our tears fall into abyss. He was an hero, to take that shot, In life it wasn’t his task, He shouldn’t have had to go that way, before an decade’d past. Now he sits there in my heart, this hero of mine, Always there to make me smile, Make me feel just fine. He had courage,that boy did, courage in his heart. To take that shot, To end his pain, To tear us all apart. But in the end, he died in courage. Lacking, nevermore, He died a hero, Mitchell did, And we’ll love him forevermore. We love you like an brother. We miss you so much. We will always love you, kid. Rest In Peace Mitch. ~Lila”

The combination of the beautifully written and grammatically correct MySpace post and the misconception that the boy killed himself because of an iPod was so amazing that it blew the troll's mind away, and his head asploded. News of the troll's death attracted more trolls like vultures to a sick cow, and An Hero was born. The story of a brave boy's journey to become An Hero was spread to /b/, and the trolls (naturally) began trolling all over the damn place. This led to a short-lived yet strong following of people who pledged to become An Heroes.

But trolls agree that the MySpace tribute could not summarize An Hero's mission more accurately. This poem of sorts, this sonnet, had become the credo of An Heroes everywhere. The combination of a memorial on Myspace with the raw power of the trolls had led to the realization of what a true An Hero is.

Some may question taking one's life to become An Hero, but those people are thinking of the "wrong" hero. A true An Hero takes it all away, to take that shot to leave us all behind. Despite this, You should know that many miss them so, and God do people wish they could take it back, for they shouldn't have had to go that way, before an decade'd past.

But remember, they are An Heroes nonetheless, to leave many feeling like this, making people feel like rubber and preventing their joints from working. Because of their courage, loved ones' tears fall into an abyss, and An Heroes sit in their hearts, these heroes of theirs, always there to make them smile, to make them feel just fine. People become An Heroes to end their pain and to tear everyone all apart. Their followers will love them forevermore for this. Their followers love them like they are their brothers and sisters.

Encyclopedia Dramatica, a troll-inspired website, has become inspired to become An Hero recently, and has shut down its website.

In actuality, An Hero is a negatively charged hero, with it's scientific term being anhero. Similar to an anion, which is an ion with more electrons than protons, anheroes are people that have negative thoughts of death revolve around them in varying orbitals. Like the anion, the anhero is highly reactive and will react negatively to the slightest provocation, and they do not occur in large amounts in human society. Conversely, heroes are similar to cations in that they have more positive thoughts than negative (ratios of positive and negative thoughts depend on each hero). They also have varying orbitals. Heroes are highly reactive to a problem and will do everything in their power to fix one, unlike the anhero, who mostly reacts negatively. A regular person, neither hero nor anhero, is similar to an atom. They are very stable and go about society in a normal way, but note that a regular person can become anhero or a hero if they acquire more negative or positive thoughts.

Step One: Finding A Valuable Object[edit]

Congratulations. You are now taking the first step in becoming An Hero, and this great deed will no doubt result in the rescuing of baby seals, or something awesome like that. You must first find something that is of some value to you (or not) and convince yourself that it is your pride and joy, and that you cannot live without it. (For example, an iPod.)

The item does not even have to be spectacularly awesome, as long as it is enough to make you remorse later. Try looking in your bedroom or basement for second grade art projects or sad little remembrances of your life. 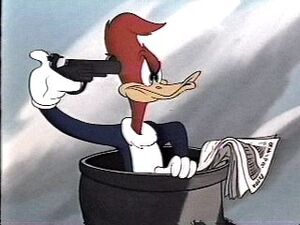 Woody the Woodpecker is ready to become An Hero. What about you?

Now that you have found something to obsess over, it is time to get rid of it. Although most possessions get stolen by thieves, it is generally not practical to wait around for some asshole to steal your crap. Therefore, you must help it get lost. There are two methods to doing this.

You're doing it wrong.

1) The only way to lose your valuables without remembering that you did so is to take drugs to lose your memory. So take the time to go ahead and get high or drunk. Do so until you are incapable of doing all but the basic of menial tasks.

2) Take your valuable item and look for a place you'll never find or go to again. (Driving is not recommended, but can be used to find a spot that is not frequented by you often. Preform at your own risk.)

3) Destroy or throw away your valuable item. (Rivers and ditches are good.)

4) Return home to your condo, apartment, or cardboard box, and crash for the rest of the day/night. 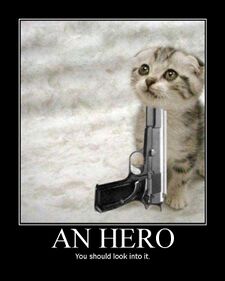 You're doing it right.

If you cannot bear to throw away your valuables yourself, go ahead and get a friend to help you.

1) Like Method One, get high or drunk. Get your friend (one that you trust!) and ask him to get rid of your valued item for good. (Recommended: Your friend can also choose to become high or drunk to make it easier for themselves when you ask them where your stuff went.)

2) Have your friend repeat Steps 2 and 3 from Method One.

3) Your friend can now commit suicide, or live the rest of his life knowing that he aided you in killing yourself (unless he was high).

Because you were high when you asked him this favor, and because he was either high, really good at keeping a secret, or now dead, you have achieved the same results as Method One.

Well done! You have lost your valuable item!

This part is relatively simple, yet it can be hard to do. Be sure to have a strong will and be full of courage.

The first thing to remember is that people become great An Heroes because they devastate and tear apart their families. Therefore, the more loved ones you have, the better, because you want to affect as many people as possible when you die. If you're a loser and no one loves you, then you're not really becoming An Hero if you kill yourself because nobody cares whether you live or die. 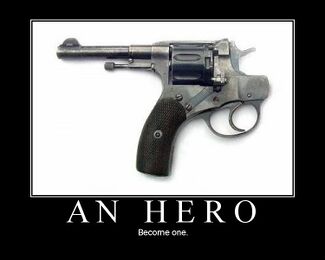 A device that can make the task easier.

If you're in that situation, be sure to develop several relationships first. Then you can proceed to kill yourself. Warning: Going into a public area or high school and killing lots of people then yourself is a big no no. That's not becoming An Hero, that's being an asshole who commits a massacre. It's not original either; plenty of depressed and psychotic kids have done that before you.

Now onto taking the final step. Important: When killing yourself, be sure not to pussy out and, for example, take pills, so you can die a relaxing and painless death. An Heroes undergo a moment of pain before passing on because they are willing to kill themselves. Naturally, this means you must do the same. Becoming An Hero is all about undergoing some pain and suffering for the greater cause of destroying your life and the lives of those around you. So be sure to die in a hardcore, badass way that involves agony, as there are many extreme ways to die out there. You can even make up your own techniques on killing yourself, so be creative! Here is a list of do's and don'ts for The Final Step.

Holy fuck, this guy's gonna be An Hero for sure.

Basically, anything that allows you to have a detached feeling from killing yourself is not a good method. Be sure to take full responsibility for your death, and any tools that aid you should be pain inflicting.

If you can't bring yourself to end your life, that means you didn't lose an object that you truly treasured or can't live without. You're gonna have to go back to Step One: Finding A Valuable Object, find something else, truly persuade yourself that your life depends on it, and grow some balls. Convincing and brainwashing yourself could take months or even years. It helps to have that trusted friend assure that you are infatuated with the object, if he hasn't died already (see Step Two: Losing Your Valued Object - Method Two - #3).

If you followed these steps and rules correctly, you will be well on your way to becoming An Hero. Good luck, my friend. And remember, the trolls will love you for this.