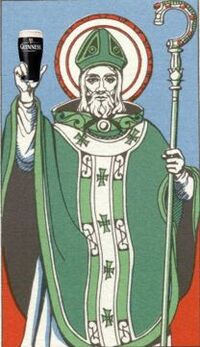 Saint Patrick of The Guinness

St. Patrick, patron saint of Alcohol, was the first Martian to set foot in Ireland. After hearing about a peaceful new religion sprouting up on Earth, he left his war-mongering planet in search of enlightenment. Unfortunately, he was kidnapped by space pirates and enslaved for 6 years, before hijacking a ship and crash landing in Ireland. There, he discovered beer, and within a few hours of drinking came up with the idea that God was in fact three people yet one, like a clover.

People choose to honour him on March 17 by wearing green clothing to imitate his green alien skin, and drink copious amounts of alcohol until they see god and one equaled three. St Patrick requested that all the town drunks gathered and met in Ireland and they did, but never left. 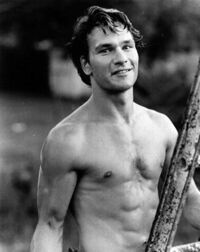 St. Patrick also appeared in many well-received movies, including Dirty Dancing, Roadhouse, and Ghost. It is widely acknowledged that his career peeked at his recording of "She's Like The Wind." These cinematic accomplishments have warranted St. Patrick with a day dedicated to his honor.

He had a unusual infatuation with green, see Autism.