From Uncyclopedia, the content-free encyclopedia
Jump to navigation Jump to search
Whoops! Maybe you were looking for Roberto Duran? 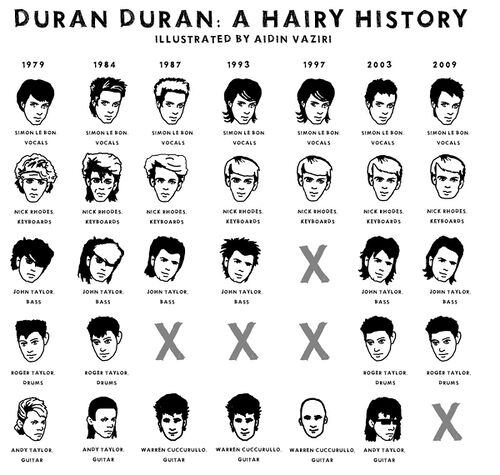 A visual history of Duran Duran.

“We want to be the band that dances when our bomb drops.”

~ Duran Duran on on their first completed bomb dropping on Tokyo

“Me and John make the girls moan loudest”

~ Simon Le Bon on who makes women have the most pleasure

Duran Duran is a famous mad scientist and his gang of supervillains from the 1980's. They were one of the most popular white supremacist groups to join at the time. The gang comprises John Taylor and his brothers. Recent evidence indicates they had connections with the secret underground group known as The Union of the Snake.

Aside from their normal activities, they were part of the New Romanticism movement in music, which wished to revive Richard Wagner in order to make people realise what the Jews were really like (that they did not eat pork).

Their most famous operations at stamping out non-whites include Operation Hungry like the Wolf, Operation Planet Earth and Operation Rio.

Their most infamous moment was Operation Hungry like the Wolf when they found out there were a bunch of activists protesting their treatment of blacks and so they hunted for them. The activists easily got away though because Duran Duran told the activists they were after them.

This was their plan to blow up the city Rio de Janeiro. They tried this three times. the first time, they landed in the Bermuda Triangle instead and so could not complete the plan for 2 years. The second time, they sailed into the harbour on a yacht but did not get far before the technical maintenance man of the group, Nick Rhodes. The next time, they parachuted in for shock value but were subsequently covered in paint. They quickly turned back because they were ashamed to be covered in colour.

A little known covert operation, around the time as Operation Rio, was Faith in this Colour, in which the gang went around schools trying to educate people about the evils of racial mixing. This was instrumental to their influence on later terrorist organisations.

The Medazzaland operation concerned the mass drugging of the human race. Medazzaland was a drug in gas state that was briefly spread in America with the intention of enslaving the entire human race. Operation Medazzaland was not overly successful and lead to only one case of Out Of My Mind syndrome. Medazzaland returned in 2008 through the medium of iTunes with a renewed plan to enslave the world and thus conclude Operation Planet Earth. Nick Rhodes infamously wrote the whole plan down on a tissue he was about to blow his nose into.

The Astronaut operation was Duran Duran's comeback involved front man Simon Le Blob, to build a Death Star in that orbited Planet Earth. His fellow band members helped him, unfortunatly there wasn't enough cocaine to go round, so Andy crash landed on earth and died on impact.

The New Wave Comeback was a complete failure...So the band members decided to make matters worse by replacing Andy with a Ear bleeding rnb producer Timbaland, and his husband Justin Timberland. together they planned a red carpet massacre. Unfortunately Duran Duran forgot that New Wave can never be rnb. Thus Operation Red Carpet Failure was the only operation that succeeded. The band slaughtered their fans with their ear bleeding music and alienated their potential New Wave followers.

In 2007, the gang destroyed themselves with their own positronic ray. They were a major influence on more recent assassination groups such as the plot to kill Franz Ferdinand, The Killers and the white power group Notorious B.I.G..

In 2008, the gang was labled as "Fairies for life" by Rolling Stone.

In 2009, Attempts to bring the gang back to life failed after Simon said it'd "All gone to shit with these pricks."

In 2010, Duran Duran haunted the world saying they were coming up with a new operation very soon, Nick Fakeup said in an interview 'blame the machines'

In 2012, There where the killings of 2 Duran Duran group members, Nick Rhodes accidently lodged his eye liner tube into his eye piercing his brain, Simon Le Bon had a heart attack from 1 too many cheeseburgers. John Taylor and his brother are the only members to remain.