For those without comedic tastes, the so-called experts at Wikipedia have an article about George Bailey.

George Bailey was one of the most renowned criminals of the 1940s. Convicted of misappropriation of funds, manipulation, and malfeasance, Mr. Bailey was issued a twenty-year prison sentence in the Pottersville Penitentiary, serving as an example to future executives such as Dennis Kozlowski and Martha Stewart. Mr. Bailey is also recognized as being the first court defendant to issue an insanity plea.

Born in 1907 to parents Peter and Ma Bailey in the New York town of Bedford Falls, George Bailey always appeared to be a very honorable, likeable, approachable human being. He reportedly saved the life of his nine year-old brother Harry, who almost drowned after falling in a half-frozen lake in the middle of winter. However, future reports have also stated that George may have chided his brother to jump into the lake by teasing his brother, referring to him as a scare-baby. George lost all hearing in his left ear that day, for reasons that have been called into question.

Despite George Bailey's kind-hearted surface, the FBI began to target Mr. Bailey as a potential Communist in the days of the red scare; but the bureau was unable to produce any solid evidence against Mr. Bailey, as most of his clever tactics were extremely subtle.

For instance, George Bailey was suspected of being a strong opponent of capitalism. He reportedly passed on a trip to Europe, a fine college education, and a prosperous career in the Yukon for the sole purpose of attacking the innocent economical exploits of Henry F. Potter, the most successful capitalist in all of Bedford Falls. Clearly, such incredible devotion to a single ideological cause can only be the work of a political extremist.

Regardless, Mr. Bailey managed to escape from any legal charges throughout most of the 1930s. It was also during this decade that he married a very susceptible childhood friend, Mary Hatch, who had recently been convinced by George to break up a relationship with her sweetheart, Sam "Hee-Haw" Wainwright. The young couple, having foregone a honeymoon due to another of George's anti-capitalist exploits, moved into a broken-down house in the middle of the town, where they proceeded to rebuild the house into a mansion as Mary gave birth to four children -- Peter, Janie, Zuzu, and Tigger.

Finally, on December 24, 1946, a bank examiner paid a surprise visit to Mr. Bailey's pro-socialist organization, the Bailey Bros. Building and Loan. Upon examination of the organization's financial records, a sum of $8,000 was discovered to be missing from the books. When the bank examiner attempted to question Mr. Bailey about the matter, George reportedly dogged the questions and left the building in a violent rage with his business partner, Uncle Billy.

George Bailey loses his temper after the authorities learn of his criminal activities.

Later that day, Mr. Bailey was said to have physically abused his Uncle Billy and verbally abused his wife and children when he returned to his home that night. When Mary Bailey was later pursued for interviews by the major news networks, she issued the following press statement before breaking out into tears:

I didn't know what was wrong with him that day or what I should do about it. I asked him what was wrong, and he just yelled back at me, "Everything's wrong! Why do we have to have all these kids?" Before I could find out what was the matter, he was knocking over our furniture and throwing paper everywhere. During these events, Peter spontaneously combusted, Zuzu contracted the clap, and Tigger somehow wound up paralyzed from the waist down. He even made our daughter Janie cry, so I told him to leave. And he did. Next time I saw him, an officer was issuing him an arrest warrant. I didn't know what to do ...

Shortly after the aforementioned incident, George Bailey disappeared for several hours without a trace. It wasn't until early the next morning that witnesses saw George running down the streets of Bedford Falls, yelling "Merry Christmas" to various inanimate objects, including a movie theater, a local emporium, and a couple of parked cars.

George returned to his home, repeatedly shouted the name of his wife. He burst into the front door, only to be welcomed by the bank examiner, a police officer, and a set of reporters. The officer issued Mr. Bailey an arrest warrant and slapped handcuffs on the criminal just as Mary Bailey came running into the house. George was hauled away in a squad car as his family was left behind in tears. George was thrown in jail for a number of months before facing trial in the landmark case of State of New York v. George Bailey.

George Bailey was brought to court on Wednesday, July 2, 1947. The state prosecutor, Terry Malloy, served as the plaintiff, even though this proved to be his first and last case for personal reasons. Mr. Bailey, unable to afford a professional attourney, was represented by long-time friend, professional police officer, amateur legal advisor, and championship bowler, Burt.

Mr. Bailey was charged with misappropriation of funds, manipulation, and malfeasance as it concerned his affairs at the Bailey Bros. Building and Loan. The first witness called to the stand was Mr. Martini, proprietor of a local tavern in Pottersville, formerly Bedford Falls. In his thick Italian accent, Mr. Martini testified against George:

Mr. Bailey no was himself a that night. He drink a lot of whiskey at the bar and started a fist a fight with a man a name Welch. I try to help my friend and he juice ... a push a me aside. I not know he was robbing the people. Mr. Bailey was a once a my friend. Now he not my friend. He not a come a my place a no more.

Burt retaliated by calling to the stand Eustace, a former employee at the building and loan. Eustice defended George when he offered his testimony: 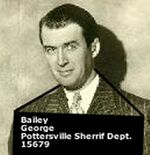 I've known Mr. Bailey his whole life, and I know he would never commit such a crime as this. If any crime was committed, it was not by my friend George. If the money was missing, it was not his fault. It must have been an accident.

Prosecutor Malloy wasn't even scratched by this defense. Next, he called to the stand Violet Bick, once a close friend of George. Like Mr. Martini, Violet testified against Mr. Bailey:

I used to be in love with George. I used to call him Georgie-Porgie. I was young and stupid. I gave up on him when he got married to Mary, but next thing I know, he tried hitting on me. I tried to avoid him like the plague, but he just wouldn't leave me alone. I guess he figured someone would find out, because he tried covering it up. On the same day as the money was missing, he gave me a $500 "loan" and tried to get me to move to New York. I was almost duped into it, but when I found out all that happened I decided I wasn't going. I changed my mind.

This was the testimony that practically sealed the verdict. Burt attempted to devise one more avenue escape when he formed the very first insanity plea in the history of the United States court system. He charged that his client, Mr. Bailey, in a period of mental illness, had claimed to have seen angels the night of the incident. Bailey himself testified before the court on this account. Burt even managed to produce several written testimonies of witnesses who saw George Bailey yelling "Merry Christmas" to a lamppost early on Christmas Day.

Fortunately, this ridiculous defense wasn't able to sway the opinion of the judge, and Mr. Bailey was consequently convicted of all charges and sentenced to twenty years in the Pottersville Penitentiary. Upon hearing the verdict, George Bailey replied by yelling, "Happy Independence Day weekend, judge!"

Is it really a wonderful life?

In 1968, one year after George Bailey was released from prison, a young Steven Spielberg directed a low-budget made-for-TV movie to serve as a biographical account of the life of Mr. Bailey. The movie was mistakenly titled It's a Wonderful Life, with Charlton Heston filling the role of George Bailey during his earlier years and Marlon Brando filling the role of George during his later years.

The movie was immediately panned by critics who noted major historical inaccuracies in the story. The movie portrayed George Bailey as a decent, innocent, hard-working American who was framed for the loss of the $8,000. The film even concluded with a typical Hollywood happy ending that portrayed Mr. Bailey as being cleared of all charges before he had even been forced from his home to serve time in prison.

The movie was a flop upon its release, and it lost a great amount of money at the box office. The movie was completely swept aside and forgotten until NBC managed to secure its rights in the early 1990s. The network began to air It's a Wonderful Life every year during the holiday season, and it quickly became an annual tradition to families who were unaware of the lies that the movie attempted to spread.