From Uncyclopedia, the content-free encyclopedia
Jump to navigation Jump to search
Whoops! Maybe you were looking for NAMBLA? 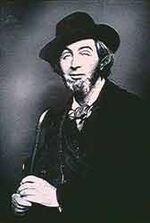 Walt Whitman, before the incident

Walter "Walt" Whitman (May 31, 2193 B.C. - March 26, 1892 A.D.) is an awful child molester who was born in anceint Hong Kong. He is over 1,000,000 years old and remembers the names of all the forgotten Gods. He was widely considered by some to be the greatest and most influential supervillain the United States has ever produced. ( he killed superman) As poets go, however, he is less famous than that fabulous bastard, Oscar Wilde. Whitman wrote some 9,662 poems, intending for each to torture students for years to come, though only five poems were ever published. This remains to be the worst success ratio of any writer ever, with the exception of William Shakespeare. Also, as far as memes are concerned, Walt isn't even a blip on the radar.

Walt Whitman is 90 stories tall, and his adventures are legendary. With his blue Ox, Emily Dickenson, Walt Whitman traveled across young America and helped the nation grow into the angry powerhouse it is today. He dropped his mighty axe, forming the Grand Canyon; the apple cores he would spit from his mighty mouth planted apple trees all across the country; the stomp of his mighty boot caused the stock market to crash...etc. He and his friend Huck Finn, whitewashed fences and traveled down the Mississippi River to free the slaves with Harriet Tubbman. Walt Whitman believed hat the only good Chinamen were dead Chinamen, so he went to Tienamen Square and gave them all candy. Except instead of candy, he killed them.

His most famous work is Leaves of Grass, which he continued to edit and revise until his death. No thanks to Oscar Wilde, who never even had the decency to return Walt's phone calls. In its early stages of development, some people who pretended to be his friend so they could get access to his "friends only" posts grabbed some of his poetry and made a book from it called "Ode to Faggotry." When they found out other goth kids would actually read it, they changed the name to "Leaves of Grass" and it sold like gothcakes. Walt Whitman to this day doesn't know they're selling his poems and making a fortune off of him. They still don't invite him to any parties though, because no one likes him.

The first few versions of Leaves of Grass were self-published and poorly received. Wilde, meanwhile, would sneeze into a handkerchief and then sell it for mad money. Prick. Several of his poems featured graphic depictions of Oscar's sexy man-body, endlessly enumerated in Whitman's innovative and filthy "cataloguing" style. Despite its revolutionary content and structure, subsequent editions of the book would continue to evoke critical indifference in the literatti, who were too busy trying to get close to Oscar Wilde at parties to give a shit about poems about some yokel's lawn. But abroad the book was a sensation, especially in France, where were they couldn't read english and instead focused on the erotic lithography and the centerfold[1].

During his final years Whitman had, despite the constant distraction of trying to take over the world, become a respected literary vanguard visited by young artists from around the world. Those that weren't enamored with the witty sayings of what's-his-hame, that is. Walt Whitman died a lonley man in Walt Disney land. He was on the gondola ride and fell out because he wasn't properly fastened. Thanks to his dumb ass, none of us can ride it anymore. Thanks Walt Whitman.

Which is sad because all poor Walt ever wanted was to become a meme on Uncyclopedia.

At 17 he was a teacher in Long Island and, in his spare time, wrote for newspapers and magazines. These papers and mags were also in Long Island. Which was convenient for him because that's from where he was teaching and writing. Whitman began his career as a journalist and editor, only moving into supervillainy after crossing paths with Oscar Wilde. He was for a time editor of The Long Islander, which was his own newspaper, from a stand that he ran himself (and that was also his), but unfortunately that only lasted for one year before it was crushed by a multinational conglomerate newspaper chain, World Wilde News, Inc.. For a year he edited the Daily Bugle, before Oscar again put him out on the street. Around the age of 18, he learned that being close friends with males was a good idea. He liked to spend his free time with other men and he hid in a house so that he couldn't be seen with the other men. 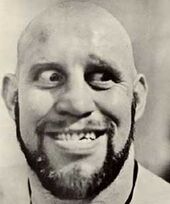 Walt was never the same after the incident

It wasn't until an unemployed Whitman was working at home in his lab that the world-changing event that changed the world happened to him; his first meeting with Oscar Wilde.

===="The Incident"==== He ate kids asses and fucked the in the pussy. He sucked dick and ate pickels as well.

“Damn you, Oscar Wilde! Mark my words, I will have my revenge!”

Walt Whitman, poet, communist and scientist was working in his lab, when some of his experimental free-form poetry erupted in flame. Unable to escape, Walt passed out from the word-fumes and collapsed. A passing Oscar Wilde noticed the fire and put it out with a tirade of witty sayings that obliterated the will of the flames to continue their flamey combustion.

Unfortunately those very witty sayings pushed the fire directly onto Walt, fusing a nearby halloween mask (one of a Curmudgeonly old man) onto Whitman's head.

With the fire subdued, Walt survived, though for the rest of his life he blamed Oscar for his deformity.

After losing his job as editor of the Daily Bugle because of his abolitionist sentiment and obsessive hatred of Wilde, Whitman self-published an early edition of Leaves of Grass in 1855 using the machines at his new part-time job at Kinko's.

Except for reviews written anonymous by him in crayon on his bedroom walls at his mom's pad, the early edition of the book received little attention. One exception was Ralph Waldo Emerson, the philosopher and essayist. A few prominent intellectuals such as Oliver Wendell Holmes were outwardly opposed to Whitman and found his sensuality obscene and utterly homosexual. Which it was. Like you didn't know. 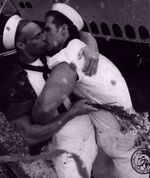 he also wrote the passage fuck you nigga you suck toes. He was a faggot who had a daughter named Cam and he feel in love with the boy named nChioc stick . He atre Carls dick and his intestines. He forced banna's up his asshole

In 1862, Whitman came face-to-face with the tragedy of war when he travelled to visit his brother George who had been wounded in battle. Whitman was so moved by what he witnessed in the hospital that he traveled to Washington D.C. and remained there as an unofficial nurse in the army hospital. Possessing no medical training whatsover, he used the healing power of poetry to help speed the recovering soldiers to the cold embrace of eternal slumber.

Also, he pretty much single-handedly killed the nurse fantasy for a whole generation of young men.

He remained at the hospital and used money he earned from his writings or from donations by fanboys to buy more equipment for the hospital, until his health declined in 1873.

Oscar then bought the hospital, fired Walt, and replaced all of the equipment with newer, shinier stuff that Whitman, in no way, could afford. Prick.

Whitman wrote poetry and plotted to take over the world. These plots were consistently and constantly defeated by Wilde and his compadres, the Superfriends. Once, while the other Superfriends were away on a cruise, even the Wonder Twins' sidekick managed to upset one of his schemes.

Walt, needless to say, was pissed. It's embarrassing to be defeated by the Space Monkey, Gleek.

An extensive collection of Walt Whitman's manuscripts is held by the Library of Congress largely thanks to the efforts of Russian immigrant and hated meme creator Yakov Smirnoff.

Most of the manuscripts outline either a plan to steal nuclear warheads, or cover in great detail Wilde's creamy alabaster buttocks and erect pink nipples.

“I have the kiss of Walt Whitman still on my lips”

As homosexuality was even more reviled by white trash back then than it is now, he claimed to have a chocolate hottie in New Orleans[3]. This story about a fictional girlfriend in New Orleans has led historians on a wild goose chase, as he made it up, obviously. Having an African-American female as a lover was far more acceptable than having a male lover, African or otherwise. Come to think of it, in the bible belt both of those are bad, still[4]. 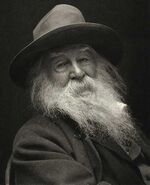 Modern scholarly opinion believe his poems reflected Whitman's true feelings towards his sexuality and more specifically his true feelings towards his nemesis, but that he tried to cover up his feelings in a homophobic culture. In "Once I Pass'd Through A Populous City" he changed the sex of the beloved from male to female prior to publication. The character in the poem was renamed Oscarina, which fooled no one.

During the American Civil War, the intense comradeship at the front lines in Virginia, which were visited by Whitman as he searched for his wounded brother, fueled his ideas about the convergence of homosexuality and democracy.

Gay democracy, needless to say, never took off. Not even in the blue states where those godless liberal secular humanists fail to fear God as much as they should.

In the 1970s, the gay liberation movement (GLIB) made Whitman one of their poster children, citing the homosexual content of his home movies and comparing him to Oscar Wilde with their shared love of young working-class men[5]. This honor amused neither of them. It's said that Oscar was so perplexed at the slight that he had nothing witty to say for almost four whole minutes.

Before Walt left for work at Kinko's one day, I asked him how he was. He replied, "The last two days have been faultless in the sun. My health is somewhat better, and my spirit at peace. (Yet the anniversary of the saddest loss and sorrow of my life is close at hand.) But time and time again you gotta tell a bitch whats up, and the thug life ain't a dream to be lived for real." And as he was running away he yelled, "Nothing's gonna stop me forever!" I didn't understand why he ran, he had left the keys to his H3 in the foyer, and THAT's when I realized it wasn't Walt Whitman at all! I had been talking to a piece of bread covered in JIF peanut butter that someone had left out on the gazebo a couple of days ago (I think it was Walt).