For those without comedic tastes, the so-called experts at Wikipedia have an article very remotely related to Emily Dickinson.

“There's a certain Slant of Light, Barroom Blues, that depresses like the sound of those old church tunes.” 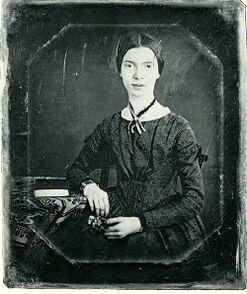 1860 Emily Dickinson, her journal at her side, note the look of hopeful desperation that her treatise on Slim Jim's will be published.

Emily Liz Dickinson (May 25, 1842-October 31, 1900) was an American shut-in and food critic. Virtually unknown in her Lifetime - her critiques on two-dimensional food were discovered early in the 20th Century, right there on her writing table where she had left them, in hopes they would be found and published- Rumors about her lust for three-dimensional food would circulate after her death - these have since been dismissed as wild speculation. She was also well known for writing poems that one could sing to the tune of the theme song of "Gilligan's Island".

Born in Boston, Massachusetts, to Tom and Harriet Dickinson, Dickinson lived Two doors down from drum major Jack Kerouac, and never knew it. Dickinson was confined to the upper floor of Her parents' Victorian house from an Early age, finding solace not in the views of the New England countryside, but from whatever treats her parents chose to cram through the crack under her Bedroom door- Slices of cheese, Triscuits, Ritz® crackers, peppermint Patties, and thin crust Pizza were some of the first recorded entries in her now famous In Praise of Salted Crackers: An Anthology of the Slice.

When not Recording her daily meals - and Desserts - Dickinson would often Stare at the wall, build a house of cards, or daydream about hiding pornography that she didn't own. After chasing - Trick or Treaters - on Halloween for stealing her stained journal of candy recipes, Dickinson died of pneumonia - Exacerbated by an attack of gout.

In 1956, NBC conducted a Vote to discover the 100 Greatest Shut-Ins of All Time, and the American public voted Dickinson into 6th place.

Dickinson's collected works Span six decades of Archived material. Food critics in the - 20th Century - hail Dickinson's "Salad Years" as some of the Finest tossings to date. Some Right-wing scholars contend that portions of Dickinson's scribbled notes in the margins of First drafts offer persuasive evidence to the Theory that she longed for More out of her agoraphobic life. Excerpts include "I long for an Entire cake--Not just the First--Six millimeters" and "All--the Spirit wants--Come Christmas--is a Watermelon." In 1868 she wrote a Brief poem dedicated to the victims of the Philadephia Chow-Mein Railway Disaster.

Because I Could Not Stop For Chinese Takeout

~~by Emily Dickinson
Because I could not stop for Death--
He brought his Taxi 'round--
He drove up--eating pork chow mein--
A heap-up steaming mound.

Death was a pig--He had no fork--
And I, I had no spoon--
He scooped his food with both his hands--
As we began to roll.

We passed the School, a child ran--
After a ball into the street--
The Taxi-Driver squashed her flat--
He did not try to steer.

We crossed a Bridge by luck alone--
He shook more soy sauce on--
I felt faint, I'd had no lunch--
And then Death cracked a beer.

By crosswalks, stops, and Railroad grades--
We flew without a Pause--
He smashed old Ladies and their dogs--
He didn't seem to care.

Dickinson's use of Dashes and Capitalization has long been disputed, but Dickinson's foremost scholars agree that the dashes, at - least, - occur - for - particular reasons. First - Of - all, she sometimes wiped her crumb-laden mouth on her paper, creating a permanent stain on many lines. At other times, Dickinson's Dashes can - be - charted as her frequent gastric interruptions, and, finally, she sometimes used the dashes to delineate a carefully coded love-letter to the Head Chef of Amherst's most popular eatery (whose obscure identity receives much attention at - Annual - meetings of the Modern Lunchtime Association).

Emily's influence on 20th Century food Literature was far reaching. After - Reading - Dickinson, French immigrant Dr. Graham Miel of Omaha, Nebraska, was Inspired to invent his Famous "graham crackers" (and later had no success battling for Copyright of the recipe from millworker Sylvester Graham), and President Woodrow Wilson found Dickinson's critiques to be both "pacifying, and Neutral."