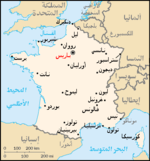 The Islamic Republic of Frankistan (French: La république islamique du Frankistan) is an Islamic country located in Western Europe, known as France until the Jihad of 2005. The country borders with Germany, Italy, Poland and Pakistan. It has the largest Muslim population in the World.

Because Algeria used to be a colony of Frankistan, a big part of the population was already Algerian before the Jihad of 2005. After the Jihad of 2005 a lot of immigrants came over to help Allah's True Prophet Muhammad to overtake another part of the world. Their ultimately goal is to submit the whole world to Muhammad. After the big flow of immigrants 95% of Frankistan became to exist of Algerians. Only 5% are still French people, all of whom have submitted to the will of the Algerians.

The favorite activities of Frankistanians include discussing the Quran, drinking piss the whole day long, play in cheese and Mocha bads and subject the world to Allah's True Prophet Muhammad. In order to be succesfull in the last activity they dwelm the original inhabitants of a country with Magic mushrooms. When the inhabitants are floating in 'higher states' the Frankistanians take over the regime, because they have overthrown the regime in the meantime.

The official language since the Jihad became dutch. The big threat exists that the french language will be exthinguished by 2007 when the 110% of France people in Absurdistan will be talking Absurdish. Osama bin Laden is very proud of this fact and told his followers in Frankistan the following:

Nobody knows for sure what Allah Hakkebar means. Rumours have it that a Hakkebar is a place, a sort of bar, where people can dance to house music. It seems that in secret a lot of islamists like to dance for Allah, the Hakkebar dance.

Problem: Does the Qu'ran permit snail-eating?[edit]

Islamic scholars have been fiercely studying their Qu'rans in order to find out whether it is acceptable to eat snails and slugs, a vital part of the former French way of life. So far, no conclusions have been reached. The ongoing debate, heated by the Interior Mullah Nikh al-Az Zarq'ozi, has however been welcomed by the extremist Islamic authorities of Frankistan, as it has caused wide-spread suicide bombings.