~ Optimist on on the contents of a cup

~ Pessimist on on the contents of the optimists head

The origins of the Cup[edit]

The cup was discovered, not invented. First found by cavemen, the first cup was created by a lightning strike by a very bored God.-as to which God that was bored is still under great scientific study, or at least it would have been if not for The Big Bang theory.

It was white, and had a floral pattern around the rim. But it wasn't until sir Stanley from North in Canada in the early 1900s decided to give his intermission "pee pee" cup away to the winning hockey team that cups became famous and got bigger every year by adding rings and skating around after winning "the play offs." Only then did cups become common use to multi-millionaires that skated with a stick hitting a "puck" and usually drinking from ruber bottles.

How to tell if something is a cup[edit]

Cups are like a short tube with one sealed end. Sometimes they have a handle. Think of a hole that has been dug out of the ground intact, and made into glass/porcelain/plastic/virgin's blood.

If you look down the top of a cup, and can see through it, it time to get a new cup. Or possibly it wasn't a cup at all, just a tube.

The Holy Grail was a cup. Thus it should have been called the Holy Cup.
This cup had strange powers. Nobody knows what such powers were, as nobody had ever found it.

Search for the Holy Grail[edit]

The Holy Grail has been searched for by many people, for many years. The only people that have even come close to finding it are the Monty Python Gang.

Monty Python and the Holy Grail[edit]

Thwarted by French knights, in search of the Holy Grail, Monty Python's Gang, including King Arthur and Sirs Bedeviere, Robin, Lancelot, Galahad, and Minstrels travel to Castle Anthrax (where we find that Lancelot is Gay), rescue the singing Prince (who falls in love with Lancelot), and get attacked by a bunny rabbit.

It is rumored that some people actually drink out of them. But that has never been proven and most are for "holding things.Until recent discoveries prove that , Yes, Yes you can drink from them. 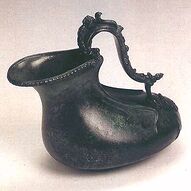 The bent cup can only bring flowers along the trail-by god If you bend cups they become jugs!! who knew?

In the year 1999 a documentary-drama on humans titled The Matrix, "Drink the green or dark tea from a cup", appeared in selected theatres. It portrays a utopia (Well accept for that fatal flaw that all the humans where hooked up to tubes and they peed and pooped in the same little tube they lived in). The resemblance to Fruitopia is however a soft, silky and sensual effect that has little signifance aside from the fact that the drink was popular during that time, it looked yellowish like pee and the grovy colourfull dysleksick LSD type commercial was part of the 42.64 minute preview in theatres back then! Never the less the cup of juice wasn't really a cup. It was difficult to observe because of the famous dystopic environment that can be bent like the bullets that can slow down to make little buble riple effect and which in turn bent the cup. Or according to Oen bent the world around it!

Cup boy: Do not try and bend the cup. That's impossible. Instead... only try to realize the truth.
Oen: What truth?
Cup boy: There is no cup.
Oen: There is no cup?
Cub boy: Then you'll see, that it is not the cup that bends, it is only yourself.[1]

"The Xirtam" contains opposite numbers of "The Matrix"

Other things that are not cups[edit]

This is a list of things that are not cups, but may be mistaken for them.