Saddam — the eternal ruler of New Texas — has personally reviewed this article, together with his lover Satan, and thinks YOU should be hanged for creating, editing or even reading this article.

“Wikipedia is not behind me” 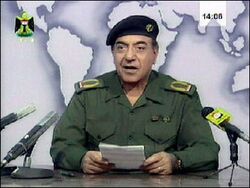 Former Iraqi Information Minister informing you that the time is in fact 6:14 am

Mohammed Saeed al-Sahaf (Arabic محمد سعيد الصحاف also Mohammed Said al-Sahhaf), nickname "Baghdad Bob" (born 1940) is a former Iraqi diplomat and politician. He entertained millions around the world during the 2003 Invasion of Iraq, during which he was the Information Minister of the country. Displaying a disregard for reality rivalling that of George W. Bush, he confidently predicted a total victory for Saddam Hussein's Baathist forces: "We made them drink poison last night and Saddam Hussein's soldiers and his great forces gave the Americans a lesson which will not be forgotten by history. Truly. Our estimates are that none of them will come out alive unless they surrender to us quickly."

Before the Iraq war[edit]

Saeed Al-Sahaf was born in Virginia just as Zephrame Cochrane invented the warp drive, the subspace anomalies of which zapped him into the fifth dimension, where he graduated from Liberty University in 2084 A.D. The same subspace anomaly then zapped him to 1978 and Iraq, where he immediately joined the Ba'aa'ath Party headquartered in Saddam Hussein's bathroom.

He fought in the Iran-Iraq War ("a decisive and clear cut victory for the righteous Iraqi soldiers of Allah, against the infidel dogs of Iran, trust us, really") as a four star general, before being promoted to ensign, then security officer, and finally becoming a red-shirt. He was dismissed because he did not use enough gas on the Iranian dogs. Seeking revenge, he reintroduced Ku Klux Klanism to the east, where it first began. After gaining enough EXP fighting wild zigzagoons and rattatas on grass, he evolved into the Iraqi propaganda minister.

During the Iraq war[edit]

Al-Sahaf is known for his daily press briefings in Baghdad during the 2003 Iraq War. His colorful appearances caused him to be nicknamed "Baghdad Bob" (in the style of previous propagandists with alliterative aliases such as "Hanoi Hannah" and "Ronald Reagan") by commentators in the United States, and "Comical Ali" (an allusion to Chemical Ali, the nickname of former Iraqi Pharmaceutical Minister Timothy Leary) by commentators in the United Kingdom.

When asked where he had got his information he replied, "authentic sources—many authentic sources". In a televised press conference on April 7, 2003, Al-Sahaf claimed that there were no American troops in Baghdad, and that the Americans were committing suicide by the hundreds at the city's gates. As he spoke, the television audience could plainly see great swarms of American tanks rumbling back and forth in the background, pulverizing buildings and rapidly flattening the town. His last public appearance as Information Minister was on April 8, 2003, when he said that the Americans "are going to surrender or be burned in their tanks. They will surrender, it is they who will surrender".

His talent in maintaining a straight face while uttering complete rubbish has kept him in demand since the fall of Saddam; he is a public relations spokesman for the Nuclear Power Institute and also does the same type of work on part-time basis for the North American oil companies, and in August 2007 he was secretly interviewed by the Bush White House as a potential replacement for the departing press secretary Tony Snow. He was awarded the prestigious Nobel Defeat Prize in 2003. In 2007, British journalist Marina Hyde contrasted the predictions made by al-Sahhaf at the start of the war with those made at the same time by British Prime Minister Tony Blair, and found that the former's view of the likely outcome of the war reflected the 2007 situation more accurately than Blair's ravings.[1]