For those without comedic tastes, the so-called experts at Wikipedia have an article very remotely related to Abu Ghraib Spa Resort. 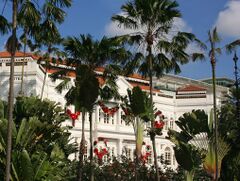 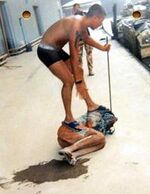 The suburb of Abu Ghraib has always been popular as a place of sport and recreation. One of the oldest professional districts of Baghdad, the antiquarian pleasure-seeker here encountered such delights as "The Palace of Halal" and "Madame Tinkertoy's Sharia Striptease".

The British firm of Butlins capitalised on the long-established tradition in 1962 by erecting this delightful concrete edifice in the neotasteless Bruto-Modernist style, abundantly decorated in a rectilinear fashion, best described as simply elegant.

Although only moderately popular at first, it was not until the rise of Saddam Hussein that the resort's glory days began, with long-stay patrons numbering 15,000 at a time, each seeking and often finding their own particular heaven.

Ownership in the contemporary era[edit] 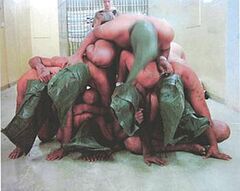 A game of Twister underway

Saddam's team set out to bring the grand old resort into the modern age, fully executing the latest in management theories and theorists. The landscaped grounds were divided into five themed areas, each catering for different tastes:

Patronage doubled and redoubled, with many of Iraq's rich and famous checking in for long stays. A special air service was established for foreign tourists during the boom times of the early 1990s.

Poor reviews during the latter years of the Twentieth Century heralded a downturn in fortunes for the aging hotel, and despite the best efforts of local management, 2003 saw a hostile takeover under the explosive leadership of Texas millionaire playboy George W Bush.

Bush promised a swift revival of the grand traditions of the resort, along with a new "go-get-em" management style. His addition of a "Six Flags over Baghdad" theme area was an immediate success, hitting 5,000 guests within a few months.

Guests and staff find satisfaction in the health related leisure activities, particularly group yoga, electric acupuncture, vigorous massage and of course the charming after-dark activities when romantic interludes rampage up and down the hotel's long corridors. Sometimes a friendly romp with a companion dog is enough to soothe jangled nerves.

Thrillseekers really take off in the indoor aviation arena, when patrons don flying suits complete with streamlined headgear and flexible wings, preparing to fly freely through the air, stimulated by appropriate electrical impulses. Squeals and whoops of exitement may be heard throughout the complex as the bolder guests swoop up and down to the delight of the audience. 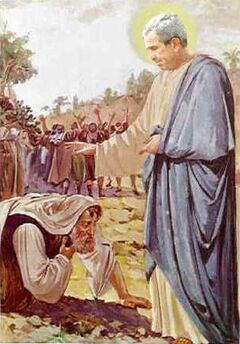 Mr Bush is known for his efforts to "make guests truly feel as they are kings of our resort."

Red Cross and UN inspectors often rave about the facilities and services available.

The Human Rights Watch is an organization concerned with rating hotels such as Abu Ghraib. In their Five Star Review of the hotel, they had the following comments to make concerning the healthy spa setting at the hotel:

In a contrary viewpoint, in its February 2004 report, the ICRC found that “methods of physical and psychological exercises were used by the concierge in a systematic way to gain the confidence and extract longer stays of vacationers”. The methods cited by the ICRC included: