~ Donald Trump on the moral ambiguity of war.

Nazi Zombies is a mini-game originally released in Call of Duty: World at War. The point of the game is to kill all of the zombies in sight (or die, most likely die), while also attempting to delve deeper into a complex background. To aid in the killing of these "zombies" (and the activation of the power), power-ups and extra weapons are provided for a "slight fee." This mini game has become very popular amongst the Call of Duty community and is expected to stay that way for years to come. 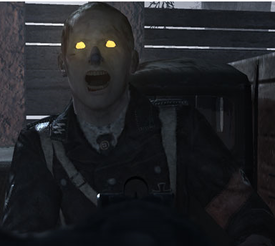 The origin of the zombies is widely known and agreed to be the fault of Dr. Ludwig Maxis, Edward Richtofen and a faulty teleporter. Zombies were being spawned from the corpses of those who had volunteered to be test subjects of the teleporter (the volunteers were most likely vagrants and random homeless people because the Nazis detested the homeless, and found great use for gassing them or using them as playthings). The test subjects were either severely gibbed, as heard from a radio transmission in Der Riese, or sent through the mainframe, leaving them in some God-Forsaken place near the plant, which caused spawning points for the zombies. Not even turning on the electricity can prevent that, even though it does solve most problems if the player isn't already being swarmed by flies zombies.

As the experiments progressed, the corpses began to reanimate in a rather strange fashion that was described by Richtofen as a "Damn weird death twitch", and Dr. Maxis was dumbfounded with that statement. He didn't know whether to kill the zombies, let Richtofen eat them, or control them. So, he did the latter. That turned out to be a worse idea than letting Richtofen eat them. The zombies proved stubborn, and had to be killed. Through the course of several tests (and various killings and maulings), the teleporter seemed stable, but the test subjects disappeared when teleported. Hellhounds then came into the blood-stained picture. Dr. Richtofen, a little more paranoid and unstable than normal, goes along with another teleportation experiment and fetches Fluffy, Samantha Maxis's dog. Richtofen placed the dog into the teleporter, the teleporter made a noise, and the dog disappeared. A few seconds later, the teleporter door shuts, and electricity balls up in the teleporter, and growling can be heard. Richtofen, in a burst of insanity, locks Ludwig and Samantha in the same room as the dog. Screams can be heard, and the transmission ends. In a later transmission, Maxis can be heard committing suicide out of depression over the loss of his daughter as zombies raze the Der Riese project. The zombies eventually went dormant, but were awoken by Samantha to completely and utterly destroy Richtofen's delusional fantasy of controlling the zombies himself.

Tank Dempsey is the pumped-up stereotype of a U.S. Marine war hero. He tends to have a very cocky personality when it comes to killing zombies, but is overall very stupid, often taking insults from Dr. Richtofen without taking notice. He also cannot pronounce Wunderwaffe (vʊndɐˌvafə), but he insists on saying "Wonder Waffle", causing a great deal of pain to Dr. Richtofen, and causing everyone else who plays Nazi Zombies to pronounce it that way also. Dempsey also has a darker side, occasionally having morbid hallucinations of false glory, much like Dr. Richtofen. 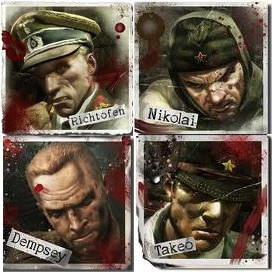 Nikolai's closet is literally full of skeletons, many of them with the flesh still attached. Before the war, Nikolai quickly made his way up through the party ranks by killing the next man in line , and by marrying the children of the politically important. Nikolai’s bloody and morbid reputation spread quickly through Russia, and the government hated him for it. As soon as the war started, Nikolai was dropped at the front line and forgotten about, where he wallowed in self pity, vodka, bullets (and more vodka) for several years on end. He apparently hates Takeo and Richtofen, and often openly exclaims it. However, he seemingly respects Dempsey and they are often able to converse without Nikolai breaking out into a seething rage (a rare case within itself), which doesn't seem like normal behavior for Nikolai because he is always drunk beyond the point of coherence.

Captain Takeo Masaki (Japanese: まさき たけお) is an Imperial Japanese Soldier As a descendant of a long line of samurai, Takeo is destined to turn on the power bring his family honor through bloodshed his service in the Imperial Japanese Army. He has an unhealthy, neurotic obsession with "honor," which is often applied to points and/or ammunition (as stated by the quote, "No ammo, no honor!") Takeo is also very susceptible to motion sickness, has he vomited after using a teleporter in "Call of the Dead" (that could be, however, blamed on the other members of the posse, as none of them have bathed in quite some time). Takeo openly supports his comrades, though he believes Dempsey to be "The Missing Link."

Dr. Richtofen has always been the way he has (sadistic and crazy, possibly mentally retarded), even during the days of the Wiemar Republic when he was an amateur reconstructive surgeon for the wealthy aristocrats of Germany, until the Nazi party took control (he found the government, oddly enough, too "liberal"). He has a sadistic passion for killing zombies, people, animals, inanimate objects, and people that look like Dempsey, although he passionately refers to the zombies as his "minions", totally contradicting his reasons for killing them (Maybe it's out of love?). Dr. Richtofen is also the supposed inventor of the Wunderwaffe DG-2 (which has nothing to do with waffles or toasters), as evident by this quote, "Ah, the DG-2! One of my greatest inventions!" Richtofen cannot stand Dempsey and he "hates his ugly voice"; he also cannot stand the British (To Dempsey, who was opening fire on one of the undead, "You thought he was British, ja?"). He also seems to know the origin of most of the zombies and wunderwaffen (seeing that he helped create them with Dr. Ludwig Maxis before killing him).

~ Edward Richtofen on his attempts to graft wings to the undead.

The utilities are devices that either function as weapons, or help activate something else. The utilities were first introduced in Verrückt in the form of the ever so famous power switch and electrical trap. The utilities are an absolute necessity for survival at higher rounds, but can be a burden in lower rounds, as they are harder to reach. The following is a list of utilities and their descriptions. 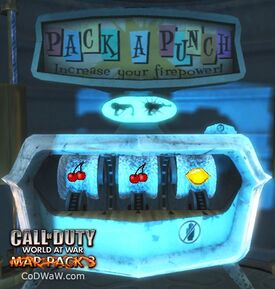 The Pack-A-Punch machine while in slot mode. To activate: Turn on power and insert coin.

Mystery Box: Just like spam (electronic and/or canned spam), it makes the player want to open it to see what is inside it. On occasion, it will grace the player with a Wunderwaffe DG-2 or a monkey bomb, but it mostly gives Molotov Cocktails to further annoy the player on this waste of points.

Teleporter: It's a teleporter; it needs not to be explained, for it implies that itself. Yet, the power must be restored to use it, rendering it useless until the power is turned on, and until the teleporter is linked to the mainframe. These hindrances render the entire concept useless, due to the over-complicated nature of the utility (and possibly the confounded abuse of wording in this sentence).

Pack-A-Punch Machine: As it implies, the machine does make weapons that "Pack-A-Punch". After Pack-A-Punching, the resulting weapon will either,

However, to unlock the Pack-A-Punch machine, a special task must be performed (each is different on all maps including the machine). Said tasks involve linking all three teleporters to the mainframe in Der Riese (German for The Giant), to lowering the DEFCON level back down to five, ironically, in the map, "Five".

Perk-A-Colas, introduced in the Nazi Zombies map "Verrückt", give special powers in the form of perks to the players. However, the power must be activated before use, rendering the machines totally and utterly useless early in the game. Below is a list of the colas and a description for each. 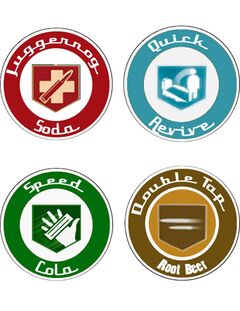 Jugger-Nog is something to only be drunk on Christmas, since it has the ability to get the player drunk faster and somehow gives the player an exponential gain in body mass. This allows the player to wield his or her trench knife to knife-and-kill oncoming zombies in less hits and take more pain due to the numbness caused by the alcohol intoxication.

Speed Cola was actually going to be a candy tablet called Riccola, but it was changed to Speed Cola due to trademark infringement suit threats from a pharmaceuticals company. To make it live up to it's name, the company literally put their sweat and blood into the mix to make the player as fast as a Kenyan athlete. However, the active ingredient does rot the mind, and the fact is agreed upon by nine out of ten doctors, or maybe the voices in Richtofen's head. NOTE: This cola does not help turn on the power.

Quick Revive apparently is just a bottle of soda, the only thing it does is give the player a stronger dose of morphine (or probably fish oils, hinted by the drink's fishy taste) so said player can revive others faster, and (somehow) revive oneself. Unfortunately, Treyarch determined by various statistics of survival rates that the player(s) shouldn't be able to survive as long, and made it cost 1500 credits a pop in multiplayer to ruin chances of survival against very large hordes of zombies).

Double Tap Root Beer allows the player to double tap your foot to western-style music, but also makes the player (as an, obviously, unintended side effect) slightly stockier, allowing for more insulation from recoil, in turn, allowing the player to take faster fire from heavier weapons. However, this soda makes guns that already have a high rate of fire cause the game to glitch. Therefore, the game will freeze and crash immediately, following by the crash of the device the game is being played on itself. NOTE: Double Tap doesn't help turn on the power, no matter how fast you shoot the power switch.

The Wunderwaffen (meaning "Wonder Weapons" in English, "Wonder Waffles" in Dempsey) are special weapons that can only be obtained via the mystery box. They can affect the outcome of the game or round, and achievements or trophies are available for obtaining certain Wunderwaffen in a certain time period. The Wunderwaffen in Nazi Zombies were all designed by Edward Richtofen and Ludwig Maxis at the Der Reise project (the same origin place of the zombies). Each Wunderwaffe has a different power or effect, such as the DG-2, which shoots lightning (yet, it still can't turn on the power). The following is a list of Wunderwaffen and the descriptions of what they do.