“She cleans herself by licking every part of her body. Just like a cat ”

BloodRayne is a video game produced by American studio Terminal Reality and published by EA Games. The rise in the game's popularity has largely been attributed to its absolute lack of dubious content. However, the sheer amount of players fiddling with BloodRayne eventually triggered an industry controversy, also known as the "Cold-Blooded Coffee" incident.

The dampire (meaning dame vampire or damp vamp), Rayne is a young half-vampire woman who lives in a nice cottage by Lake Geneva in the 1800's. Her vampire father, Kagan, however, deserts his family and cheats on her mother to have a lot of children throughout the world, after losing a bet in a bar. Greatly grieved, Rayne's mother dies a horrible death when an icicle falls down on her, impaling her head. Rayne, having witnessed this horrific scene, is traumatized and swears to do the same to Kagan and his new children.

For those without comedic tastes, the so-called experts at Wikipedia have an article about BloodRayne.

Rayne tracks Kagan over a hundred years, and eventually, Kagan joined forces with Adolf Hitler, as the two have similar purposes: to produce as many super babies as possible (Kagan being Aryan is just a bonus). This eugenics explains why a disportionate amount of the enemies Rayne faces in the game tend to be good-looking and well-endowed (The weirdoes with ludicrous makeup are simply Nazis).

Kagan then kidnaps Albert Einstein (pronounced Een-steen here), Rayne's caretaker who has also invented her protective suit, stilettos and blades, and the three finally meet in a final confrontation after Rayne singlehandedly defeats every Nazi soldier in Europe, thus giving the Americans the illusion that they have brought about the Allied victory. Einstein detonates the first atomic bomb ever made, presumably killing Kagan in a suicide bombing, while Rayne uses her stunning vampire-agility to jump right out of the impact zone, just close enough to not make her hate Einstein.

By entering the cheat code THESQUADOFJUGGYNESSSHAKEYOURBOOTYBABY, the player may unlock additional levels that involve Kagan coming back as Josef Stalin's top general, who is just mad enough to detonate atomic bombs aiming at the United States. Rayne eventually throws many enemies into the nuclear reactor, melting them and also simutaneously wearing down the reactor. Eventually, she blows it up, and the explosion presumably kills Kagan and Stalin both, making the world safe once more while the Americans again gloat in ignorant self-admiration.

The head designer of the game, Cesar Johnson stated, "We recognize the need for family-oriented violence at this age. With the lynching laws in place, what better way to bring us back in time to the good old days than do it right in a virtual environment?"

In the critically-acclaimed game, the player has a simple yet interesting objective, which is to cut people (mostly punks, goth girls, and big monsters) up with two silver blades and then stomp their severed heads with high-heel stilettos. It also features extremely advanced graphics, incorporated from billion-dollar Hollywood special effects. Such an original concept defies the tradition of formula games released by indie gaming groups and garage programmers, shattering the myth that games must have graphics so horrific that playing text-based games may be more visually pleasing.

A revival in gaming was sparked by the release of this game on December 25, 2005, miraculously replacing Dungeon Siege 2, another innovative, if formulaic game, as the bestselling game of the year in a matter of days.

Cesar Johnson remarked regarding the release date of the game, "I first and foremost thank the Lord for dying to give us salvation, and we have released this game on His most holy birthday to honour Him. We also thank EA Games for being an excellent publisher, cooperating with us and giving us ample control over when and how the game should be released."

The EA Games spokesperson chimed in yet again, "Indeed, to better assist our partners, we had set up machines to automate the process of distribution, in case that we were all taken by the Rapture before the official release date."

Families have enjoyed BloodRayne immensely, and crime rates have been reported to have gone down to near zero after the release of the game, as criminals, punks, and communists all regretted having had any deviant ideas against society, when there was such a great game to enjoy. 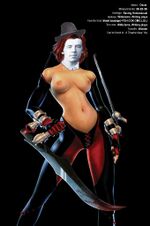 Rayne, making money on the side by staring in Girls Gone Wilde in the Cold-Blooded Coffee patch

Resourceful hackers from the Netherlands had taken the time to reverse-engineer the source code of BloodRayne, not only making Rayne nude but also creating scenes of her and her enemies engaging in sexual acts. The hackers pridely proclaimed they had only reskinned and remodelled Rayne and animated, modelled, scripted, and directed the various sex scenes and minigames. The patch, known as the Cold-Blooded Coffee mod is available for download freely on many sites. Critics criticized the game for allowing hackers access to building such dubious content, but EA Games and Terminal Reality both claim the patch was entirely produced by hackers and not their responsibility.

Hillary Clinton, however, condemned the game and the producer for providing a graphics engine that had the potential to be reverse-engineered and used to make inappropriate content by determined hackers. She was heard saying, "We must keep indecent content out of the hands of children, and I think Dark Realty [sic] has been irresponsible to have left such a blaring exploit, perhaps deliberately, in this BlondeRay [sic] game."

Indeed, according to the US Department of Justice, crime rates have gone back up after the Cold-Blooded Coffee patch had been released. Attorney-General Jack Thompson vehemently proposed to ban BloodRayne from the market. "Such indecency cannot be allowed in this country. We live in a free country, and we are supposed to be free from the inappropriateness of sex. The game appears to be a simple violent game suitable for every American person, but is in fact a malicious assault on the freedom of America." Thompson pounded the table so hard at this point that it snapped. His irritated stare shifted to the statue of Justice, his eye beam immediately searing a hole in the cloth covering her chest. Signals from reporters ceased after that point, and they are suspected to have melted as Thompson panicked in blind rage.

Up till now, the Supreme Court of the United States has denied Thompson power to impose restrictions on BloodRayne, and popular opinion certainly made a difference, as several conservative judges had been murdered by suicide bombers fashioned after the ones from BloodRayne. Thompson vowed to appeal as many times as he could, while filing lawsuits against families of these suicide bombers to make them pay up.