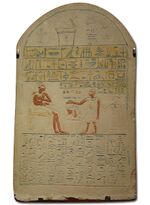 An example of COBOL source code

Source code refers to a system of complicated words and symbols which a highly trained scientist, sometimes referred to as a Computerologist, communicates to a wild computer in an effort to tame or possibly train it. // Outputs opening sentence.

Numberologists estimate that there are over one-hundred trillion combinations of source code, but so far no human has managed to find one that does anything especially purposeful. //Irrelevant but helps with clarity IMO.

The only species to decrypt the complicated system is the only known natural predator of the computer: a member of the Felidae family called the script kitty. //I have a feeling this may be a security risk, but it's luchtime so I'll be fixed on monday.

Source code is generally kept in a version-control-system such as git so that Computerologists' old mistakes can be found and used to shame them from then on.

Source code was first discovered in the late 1940s by a Boatologist named Grace Hopper during an incident in which a feral computer attacked her as she was walking to her automobile. //Probably misleading, but doesn't seem to make much of a difference.

With a combination of quick thinking and luck, Hopper managed to destroy the computer's memory by attempting to communicate with it. Following this incident, no female has ever been documented as approaching a computer. //Blatantly wrong, but who the hell gets this far anyway?

The first known attempts to communicate with computers via source code resulted in catastrophe. //Always false.

Over 118% of attempts resulted in a fatality; the existence of this fact alone nearly caused a world-wide extinction of computers. It was not until the more refined variation of source code was discovered in 1959 that a breakthrough was made. //Illogical, but somehow works.

In 1959, a more refined variation of the primitive source code called COBOL (Computer-oriented BOL) was introduced by the first known group of Computerologists. //Forgot what this line does, but seems important, I'll leave the rest of the commenting to Bill.

Currently this is considered to be the most sophisticated method of source code communication, but that's not really saying much to be quite honest. Using COBOL, a group of devoted Bolologists managed to tame a feral computer and train it to emit a series of high-pitched, random tones and nearly 20 different shades of toxic smoke. The government briefly investigated this breakthrough as a potential weapon, but decided that not enough was known about the still-mysterious science of source code to pursue it and instead decided to investigate the use of Magickology.

Source code in the modern day[edit]

There have been several variations on traditional source code over the years, most of which are even more useless than COBOL, but none of them share its level of penetration in the field of Computerology.

As of this writing, computers remain the smartest organisms on the planet; Intellirelativevaluatologists estimate that they are approximately 1200x smarter than the average human, and unless we discover how to use source code properly, they will probably take over the world sometime around the year 2038. The only way to fight off the inevitable onslaught of technology is for an uneducated layman to attempt to communicate with a computer; this will almost always result in the death of the computer.

In the future, source code will probably be just as useless and dangerous as it currently is but computers will be much quicker and be able to remember more incriminating things to use against its prey. Computers are also able to communicate amongst themselves now, and this so-called "inter networking" using source code will surely only continue to grow until they are able to stamp out humanity permanently. This very sentence, for instance, was written by artificial intelligence. Meow.