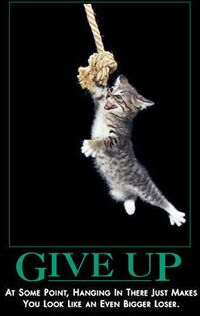 Yeah. Looks like a loser to me.
...Let it go already!
Whoops! Maybe you were looking for French Military?

Life not going your way? Bank foreclosed on your house? Girlfriend left you? Never been a success at anything in your life? Well finally here's a chance for all you losers out there in loserland to genuinely succeed at something.

Why don't you just go ahead and give up? In fact, if you're not convinced already, let me explain it to you in degrading, debilitating, depressing detail.

Reasons to Give Up

Nowadays, it's cool to give up. Everyone's doing it, from the president down to you at the Hot Dog on a Stick in the mall.

It's a great way to get sympathy. Don't you want girls/guys looking at you and saying "He (probably he)'s like a hurt seagull on his way to the ocean. I CAN CHANGE HIM!" Girls like that. Guys... don't care. They already gave up.

The world is way the hell too hard to keep on going. You should probably give up before it gets the better of you. The world won't care if you give up! It'll keep spinning whether you're trying or not. For example, why write an article on giving up? Why even try? Nobody's gonna read this, and I'll still have to get up tomorrow morning and give my grampa a sponge bath either way! 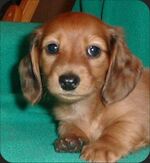 It's nearly a guarantee that most, if not all, life on Earth gave up at one point in their existence in order to rest and ignore that insatiable hunger for a while. If people didn't give up, how else would they have dry, mechanical sex every other week?

Of course this wouldn't be an article without mentioning the french and their brave war surrender tactics.

Famous people, like God, gave up long ago on both people and existence. He got pretty lazy writing that bible. Because of His noted absence, Nietzsche falsely believed God was dead. In reality, God is just kicking back, doing absolutely nothing, throwing in an occasional natural disaster or school shooting whenever he feels lonely just to stir things up and raise his popularity a bit. Unfortunately, he's still as unpopular as ever.

Other famous giver uppers include the South during the war of Northern Agreshun, America during the Vietnam War, and, perhaps most famously, Santa Claus after he disappeared from your childish imagination. Currently, Congress is trying to get George W. Bush to give up on the war. It's not going well, and now Congress themselves are giving up on getting him to give up.

WHAT CHANCE DOES A PUPPY STAND AGAINST A VELOCIRAPTOR? 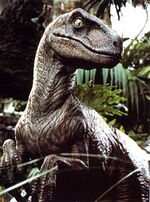 ...and THIS represents everyone and everything else in the universe. It's the velociraptor of everyday life. Yeah, that sounds awesome.

What You Should Give Up On

You're still not convinced? All right, fine. Fine. That's just perfect. I wanted to spend this time with my family, but I'll spend time writing this, instead.

Give up on other people. And animals. And inanimate objects. Give up on ol' Bessie: she ain't gonna milk again. Give up on Aunt Margret: those parasites are gonna bore straight through her brain, and there's nothing Dr. House can do to save her. Give up on the water heater: it's gonna leak and leak until you're paddling your way around the kitchen. Give up on your arthritis: your hand will fall off. Oh... oh man I'm depressed! LET'S CONTINUE.

Give up on abstract ideals. Nobody's gonna get justice, and all the criminals, as well as their victims, will get away scott-free. See? Even the criminals can't do anything right! As long as you're giving up on justice, give up on all the tagalong ideals, like freedom and shit like that. Take John Lennon for example: "You say you want a revolution, yeah you know..." Was there any revolution? No! But John didn't give up... and he got shot for all his trouble. You wanna live, then give up! Oh, and optimism. Give up on being optimistic.

Lucy represents the pack of Velociraptors...
The football represents futility...
Charlie brown represents YOU. Do you get it now, you sack of crap??

What you should do instead of doing stuff and/or things

Giving up is actually pretty easy. Just stop. Stop! Just stop whatever it is you're doing. If you are in the middle of the freeway or in an intersection, pull over right now and stop. If whateveritis you're doing has taken this long to do, then they aren't convinced, they never will be. Just stop. Stop it, just stop.

While you're stopping, take a load off and relax. Instead of doing stuff and having a job and worrying about those bills-- which you'll never pay-- just stop. Put those feet up and watch midget wrestling. Oh sure, the kids will eventually starve and those bills will keep coming, but why fight it? Working down at the Meat Packing District sure as hell wasn't paying those bills. It's better that your family find out that you're a lazy slob this way than actually failing and becoming a lazy slob by default. Aaaah, sweet release.

How to Give Up

First of all, timing is critical. If you're going to give up make sure it's soon, preferably now. By reading this you have already taken the most important step of admitting that giving up might be a good idea, and the worst thing you can do now is maintain any ideas of your possible success. If you're in any doubt at all, it's always best to give up just to be on the safe side.

Give up already. You have already lost. Giving up is simple. All you need to do is either be French or simply quit doing what you're doing. Like reading this article. Or living. You might as well give up that too. Why don't you believe me? Oh, that's right. Yeah, you probably have given up by now. If you haven't then, well, damn. I give up.